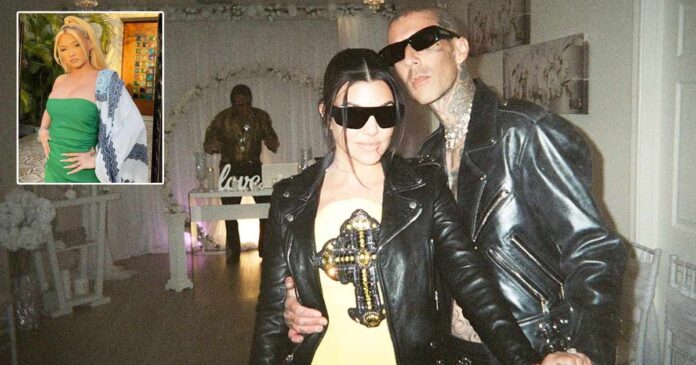 Kourtney Kardashian and Travis Barker have been one of the most discussed couples of the entertainment industry lately and most of it has to do with the sizzling chemistry they share with each other. The couple has been very vocal about their affection for each other in the recent past though social media and their viral PDA clips only prove the point that they are enjoying this honeymoon period of their relationship. According to the most recent reports, however, Travis recently had a health scare and is still under treatment for it while Kourtney is supporting him through the tough time.

For the unversed Kourt and Travis have been married for a month as they had the most dreamy and fairytale-type wedding in Portofino, Italy. They exchanged the vows in the presence of just a few family members and friends and pictures from the venue were all over social media just within minutes. Kourtney’s unique lingerie-inspired white mini wedding dress and the stunning veil with the most intricate detailing was clearly one of the many parts of the wedding that had us all hungry for more.

According to a recent report by TMZ, Travis Barker is currently admitted at a medical facility in Los Angeles over a health scare The drummer reportedly visited West Hills hospital on Tuesday after he was experiencing a ‘health issue’. The medical staff there, was of the opinion that the musician needed additional care and that was when he was shifted to Cedars-Sinai Medical Center in an ambulance.

Kourtney Kardashian could also be seen by his side in the TMZ pictures while Travis Barker was being taken to the ambulance in a wheeled bed. On the other hand, Travis’ latest tweet right before the incident read, “God Save Me” and it has left the internet very confused. They are mostly wondering if it was a genuine care for help or was he just promoting his next song with Machine Gun Kelly which has been titled the same.

On the other hand, Travis Barker’s daughter, Alabama Barker, has asked the people to pray for her father through an insta story which has the internet worried over how serious it is. “Please send your prayers”, she will wrote with an added pleading emoticon.