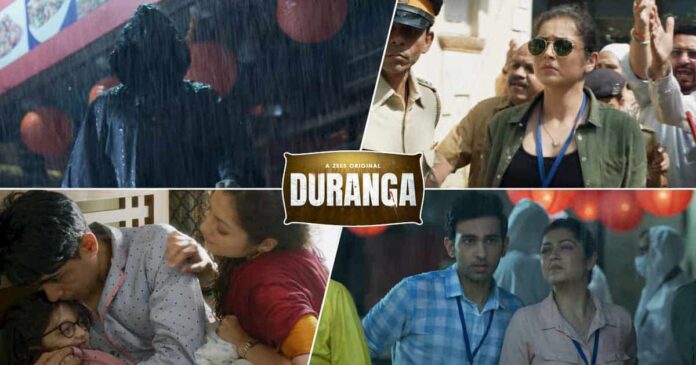 Titled ‘Duranga – Two shades of a lie’, the series brings to the fore a unique love story where Sammit Patel (played by Gulshan Devaiah) appears as the ideal man, father and husband. However, is this man too good to be true? In the meanwhile, Sammit’s Inspector wife, Ira (played by Drashti Dhami) begins investigating a series of gory copycat murders by the suspected accomplice of a psychopathic serial killer Bala, twenty years after his suicide. The case leads Ira to shocking revelations about her husband’s past and threatens to destroy her seemingly perfect family.

Duranga primarily deals with the subject of how well do you know your partner and how strong is your relationship in the face of a hidden, twisted past.

Drashti Dhami said,“I am a big fan of Korean dramas so when I was approached to be a part of the first-ever adaptation of a Korean series in the Indian market, I could not contain my excitement! What attracted me to Duranga was its intriguing script which packs a punch with all the elements that make for a great story – from an unconventional love story and a seemingly perfect family to a hidden, twisted path and the unfolding of a series of crime, Duranga has it all! Also, this is my first time at playing a police official so it was a dream role with a dream cast and crew”.

Gulshan Devaiah said, “What meets the eye is not what it seems or is it? That’s Sammit in one sentence, but I guess humans are far more complex and grey than one sentence can explain, and Sammit is delightfully complex and all sorts of grey.He loves his family deeply but has a past, which, if revealed, may take them away from him and so he must do whatever it takes to keep his family together. It was a lot of fun & a fair bit challenging for me to figure out and seamlessly play the two sides of Sammit, one that you see & the other that you don’t see”.

Director Pradeep Sarkar said, “When I heard the story, I quite liked the plot. In the dual character of Sammit, Gulshan Devaiah rocked while on the other hand Drashti Dhami as a housewife/ super cop was really good. The more you get into the story, it ignites the characters in different shades and every twist and turn is new. It keeps you on the edge and you don’t realize how the episodes go by! I tried my best to keep a surprise element while working with the camera with DOP Quais. The shades of the story have also been represented by the camera. After Mardaani I again found a suspense thriller space to work in. Got total support from Goldie to represent myself in telling the story. I am sure the audience will be attached to it in a binge watch”.

Director Aijaz Khan said, “The moment I was asked to do Flower of Evil, I jumped at it. It is quite different from what I have done in the past and that is what drew me in. Duranga is our interpretation of the show”.

Must Read: Koffee With Karan Season 7: Aamir Khan Asking ‘Your Mother Doesn’t Mind You Talking About Other People’s S*x Lives’ To Kareena Kapoor Exposing Karan Johar – Highlights Of The Promo!