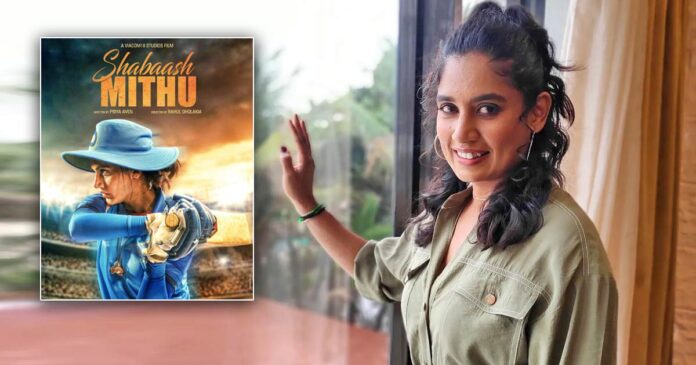 Mithali Raj needs no introduction. From being former captain of India’s women’s cricket team to being the highest run-scorer in women’s international cricket, she has a lot more to her credit. The legendary right-handed batswoman was in the capital for the promotion of Taapsee Pannu starrer Shabaash Mithu, which is based on her life.

Taapsee Pannu is seen playing Mithali on screen. When Mithali came to know about a biopic being made on her, she couldn’t believe for a second.

Mithali Raj told IANS in an interview: “Initially I thought they were just kidding. But later when the makers told me in detail I realised this is reality and they are looking into it.” Mithali added that after knowing about a biopic being made on her, she took it as a great opportunity.

Mithali Raj continued, “I also find it’s a great opportunity to get the journey of women’s cricket in our country. And it is also important in a way for people to know and understand when and what the hardships women athletes have to go through in our country with the support system and in the way society perceives the woman athlete.”

Mithali shared how she reacted when she came to know that Taapsee will be seen depicting her on screen.

“When I got to know that she’s (Taapsee) doing the role, I also did my homework. I’ve seen a couple of her films. She played a hockey player so I knew that she doesn’t necessarily have to work much on fitness or to get the athlete’s body. But maybe the cricket part skill is something she probably would have to work a lot more on, but then after watching the trailers I should admit that she has really worked hard.”

Furthermore, Mithali Raj talked about the changing scenario of women’s cricket and how it is gaining more prominence and getting its independent identity.

Mithali said: “I think post the 2017 ODI World Cup, a lot has changed. We started slowly coming out of the shadows. Earlier the women’s T20 World Cup was also run in tandem with the men’s T20 World Cup. Right now it is a standalone tournament, slowly, the leagues are happening around the world. And I’m sure at some point, maybe by next year, we’ll have our own league.”

She also spoke about the way viewership has changed and how people are now more interested in watching women’s cricket.

“So, now women’s cricket is ready to stand on its own. And in terms of viewership and the way people turn up to watch our matches have also changed earlier, actually, like many knew that we were playing an international series, so the grounds of the stadiums would be empty. Now you know when it is marketed well and matches are televised there are a lot of people who are turning up to the stadium to watch us and a lot of young children are coming to watch our matches. I think it has definitely changed a lot and I’m sure it will change a lot more in the future too,” she concluded.

Directed by Srijit Mukherji and produced by Viacom18 Studios, Shabaash Mithu stars Taapsee Pannu in the role of Mithali Raj. The film is set to release on July 15.

Must Read: Shah Rukh Khan & Salman Khan Had A Secret Meeting With This Star Tamil Director, To Come Together In A Film Sooner Than Expected?