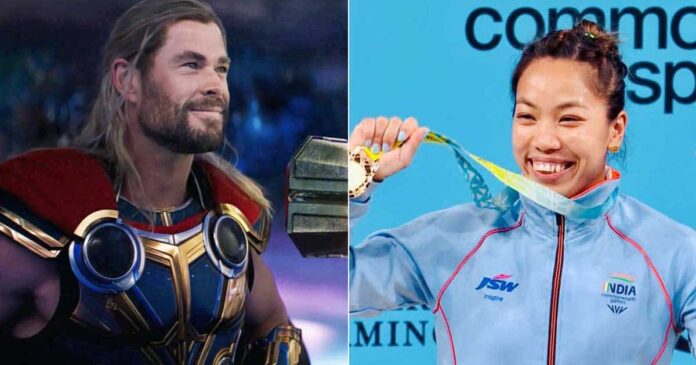 Indian weightlifter Mirabai Chanu made everyone proud as she snatched the Gold medal at the ongoing Commonwealth Games 2022 in Birmingham. Earlier she won silver at the Glasgow games, while gold in Gold Coast. The nation is showering love on the athlete and now it seems like Hollywood star Chris Hemsworth has also become her fan. The Avengers star complimented Mirabai with a Thor twist. Scroll below to read the whole scoop.

Chris has been playing the God of Thunder in Marvel Cinematic Universe since 2011 and most recently he appeared in his 4th solo MCU film, Thor: Love and Thunder. He reprised the character in Avengers, Avengers: Infinity War and Avengers: Endgame.

Coming back to the topic, last week at the Commonwealth Games 2022 Mirabai Chanu bagged a Gold medal after she ended with a total lift of 201kg (88kg 113kg) at the showpiece event. Her family along with followers went crazy as they showered their love for the athlete. However, it was Thor star Chris Hemsworth whose tweet is now winning everyone’s hearts.

Soon after Mirabai Chanu won the Gold medal in Commonwealth Games 2022, the weightlifter thanked her fans on Twitter. She wrote, “Lifting 201kg never felt easy but thanks to the love and wishes of billions back home, every challenge is just an attempt away.” Reacting to the post a user tagged Chris Hemsworth and wrote, “Time for Thor to give up his hammer.”

Interestingly, the tweet came to the actor’s notice and he was quick to reply, giving a Thor twist, the Australian star wrote, “She is worthy! Congrats, Saikhom, you legend.”

She is worthy! Congrats, Saikhom, you legend.

Mirabai’s mother Tombi Devi in an interview said that she couldn’t sleep the night before her game and as quoted by Hindustan Times, she said, “I am so proud of her. We stayed up late last night to see her event. Now, her sisters, relatives and the neighbours are celebrating with the tricolour, and some indulging in the traditional Thabal Chongba dance.”

Not just Chris Hemsworth, Mirabai Chanu was also praised by PM Narendra Modi. He wrote, “The exceptional @mirabai_chanu makes India proud once again! Every Indian is delighted that she’s won a Gold and set a new Commonwealth record at the Birmingham Games. Her success inspires several Indians, especially budding athletes.”