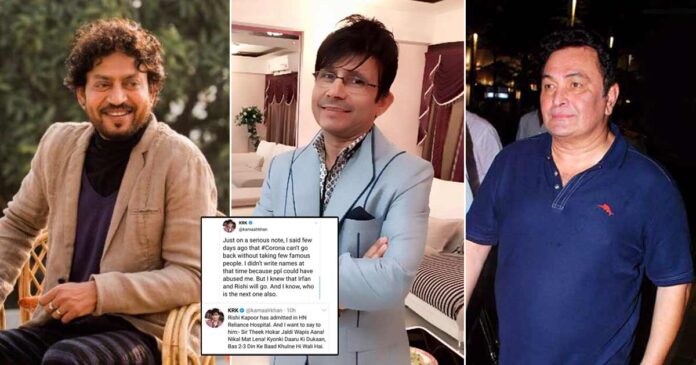 Kamal Rashid Khan known as KRK who happens to be a self-proclaimed critic has been arrested by Mumbai Police earlier today. He is also an actor and has done a few Bollywood films which happened at the box office. Now coming back to his arrest, the self-proclaimed critic back in 2020 made derogatory remarks on late actors Irrfan Khan and Rishi Kapoor for which the Malad Police have now arrested him. Scroll below to read his tweets.

KRK is pretty popular on social media, especially Twitter where he leaves no chance to mock Bollywood. From films to actors, the self-proclaimed critic never misses an opportunity to make a mockery of the entertainment industry. His arrest came after the complaint of Yuva Sena leader Rahul Kanal who didn’t like his derogatory remarks on the late actors for gaining popularity through it.

Amid the arrest of the actor and self-proclaimed critic, his tweets from 2020 are going viral. KRK tweeted against veteran actors Irrfan Khan and Rishi Kapoor, take a look at it below:

“Just on a serious note, I said few days ago that #Corona can’t go back without taking few famous people. I didn’t write names that time because people could have abused me. But I knew that Irfan and Rishi will go. And I know, who is the next one also”

Later when his tweets went viral, it turned into a huge controversy and KRK deleted them from the micro-blogging site.

Take a look at it below:

This Pathetic KRK is arrested. Look at his disgusting tweets that he tweeted back in 2020.#KRKArrested pic.twitter.com/2I4IR3Ooqt

What are your thoughts on KRK’s tweets going viral amid his arrest? Tell us in the comments below.