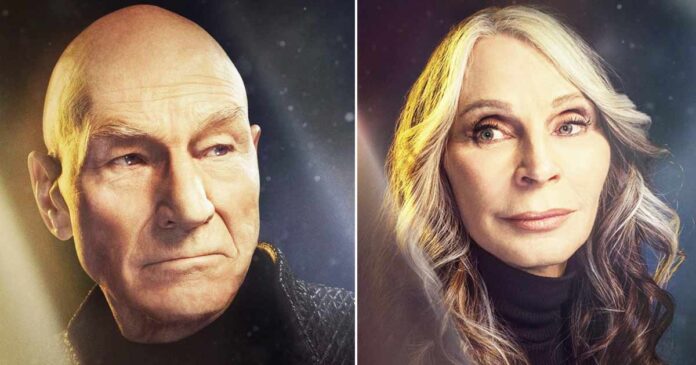 ‘Star Trek: The Next Generation’ (‘TNG’) cast members Patrick Stewart and Gates McFadden reunited on stage at San Diego Comic-Con, where they promoted the third and final season of series ‘Star Trek: Picard’.

Though they were not able to make it to Hall H, Stewart and McFadden will be joined in the new season by ‘TNG’ co-stars Jonathan Frakes, LeVar Burton, Michael Dorn, Marina Sirtis Brent Spiner, and fellow ‘Picard’ co-stars Jeri Ryan and Michelle Hurd, reports ‘Variety’.

According to series executive producer Alex Kurtzman, Picard will have to set out to find and reunite his old crew, who are spread out across the galaxy. “I think we took two seasons to earn the return of the (‘TNG’) crew,” Kurtzman said.

Alex Kurtzman stayed mostly mum on who the main villain of the new season would be, other than to say “I won’t say much except to say that she’s amazing”.

Patrick Stewart also teased that he will indeed set foot on the Enterprise-D at least once in Season 3. “I forgot that we had carpet in there,” he joked.

The team behind the show also debuted a new teaser trailer for the third season of ‘Picard’, which can be seen below. The panel was moderated by Lea Thompson, who directed two episodes of ‘Picard’ Season 2 and also appeared in a small onscreen role in the season’s fifth episode.

The new teaser for Season 3 features first looks at the ‘TNG’ characters who have not yet appeared on ‘Picard’, namely Burton’s Geordi, Dorn’s Worf, and McFadden’s Crusher, as well as some intriguing hints at what they’re up to.

Geordi appears to be in an admiral’s Starfleet uniform, while Worf appears to be wearing captain’s rank insignia. Dr. Crusher, however, is out of uniform. Season 3 of ‘Picard’ marks the first time the central ‘TNG’ have performed together since the 2002 feature film ‘Star Trek: Nemesis’. The third and final season of ‘Picard’, which the cast concluded filming this spring, will premiere in 2023.

Star Trek: Picard is the eighth Star Trek series, and was launched in 2020 as part of Kurtzman’s expanded Star Trek Universe. The series features the retired Starfleet Admiral Jean-Luc Picard, with each season exploring different aspects of the character and covering issues that come up in the last stage of a person’s life. It stars Patrick Stewart stars as Picard,