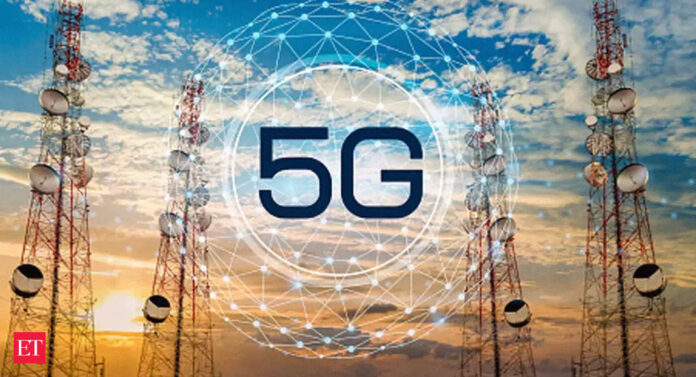 The Department of Telecommunications (DoT) is unlikely to refer the 5G reserve price recommendations back to the telecom regulator for a downward revision, dealing a blow to telcos who are seeking a steep reduction in the floor price.

A senior official told ET that the DoT is likely to seek clarifications by this weekend or early next week on certain issues, including on the reserve price for the millimetre wave (mmWave) in the 27.5 GHz to 28.5 GHz band that can be used both for terrestrial and satellite communication services.

“The standing committee in the DoT is likely to send its communication to Trai by the end of the week or early next week,” the official told ET. However, the committee is unlikely to raise any of the concerns flagged by the industry including a call for a steeper cut in the reserve price of 5G spectrum, the official added.

After the Trai’s response to the clarifications, DoT will put up the regulator’s recommendations to the Digital Communications Commission – the highest decision making body in the department – to take a view on pricing. The DCC’s recommendations will then be sent to the Cabinet for final approval.

The Telecom Regulatory Authority of India (Trai) had on April 11 recommended a base price of Rs 317 crore a unit for airwaves in the premium 3.3-3.67 GHz band, a 36% reduction over its last recommendation in 2018. It also cut the rate of the coveted 700 MHz spectrum by 40%, to ₹3,297 crore a MHz over its previous recommendation in a bid to spur India’s mobile phone companies to bid aggressively in the upcoming 5G airwaves sale.

The prices given were for a 20-year spectrum use, with the price for 30 years to be one-and-a-half times the recommended rate.

But carriers have deemed the latest prices also as too expensive and have called for a 90% cut in reserve prices of 5G airwaves, in line with global rates. At 90% lower, the price of the 3.3-3.67 GHz band would come to Rs 49 crore per unit, while that of the 700 MHz band would stand at Rs 657 crore per unit.

Mittal underlined the criticality of telcos investing top dollars in 5G network rollouts and covering more cities in the shortest span rather than getting burdened by hefty spectrum costs that would slow down 5G deployments. “The multiplier impact that a faster high-speed, low-latency network can have for the country is many times more than what can be achieved by picking up some money upfront,” he added.

But the DoT official said that the Telecom Regulatory Authority of India (Trai) had recommended a base price for the 5G bandwidth after a lot of deliberations. And the DoT was racing against time to hold the auctions at the earliest possible – in May or June – in order to meet internal deadlines. The PMO had asked the DoT to auction 5G spectrum at the earliest so as to facilitate at least an initial launch of commercial services on August 15.

The officer said that DoT’s communication would not be in the form of a back reference to the regulator but only clarification, as it would take less time.