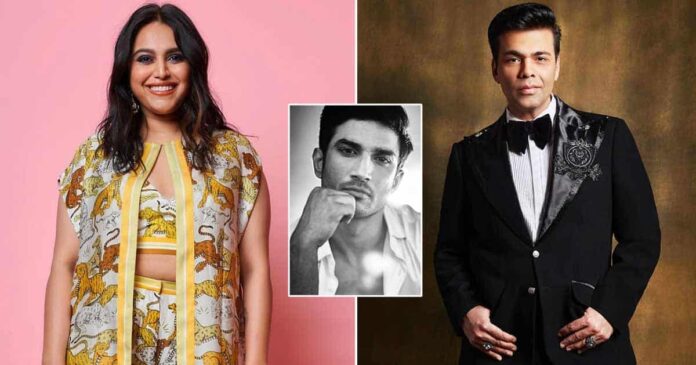 Bollywood actor Sushant Singh Rajput passed away on June 14, 2020 by committing suicide at his Bandra home. His death came as a shock and soon many began to blame filmmaker Karan Johar for promoting nepotism in the film industry which ultimately led to Sushant’s death. After two years of the incident, Swara Bhasker now claims it is unfair to blame the filmmaker for his death.

The Raanjhanaa actress recently spoke about the ongoing boycott Bollywood trend on social media and celebrities like Akshay Kumar and Aamir Khan becoming a soft target for criticism and online hate. Now the actress comes in support of the ace filmmaker. Scroll down to know more.

Talking to Connect FM Canada, Swara Bhasker spoke in Hindi, “There’s an atmosphere of fear. In the industry… there is this idea of not engaging in controversy. There is a genuine belief in the industry that if there’s a controversy happening, it’s best not to bother or comment on it.”

Previously, Bollywood actress Swara Bhasker said that she has difference of opinon with Akshay Kumar due to his support of certain films. However, she clarified that she doesn’t mean his films to flop or that he shouldn’t release his films. She also said how Bollywood is not not one tangible, homogenous entity hence there could never be one voice coming out of the industry.

For more updates on Bollywood, tune into Koimoi.