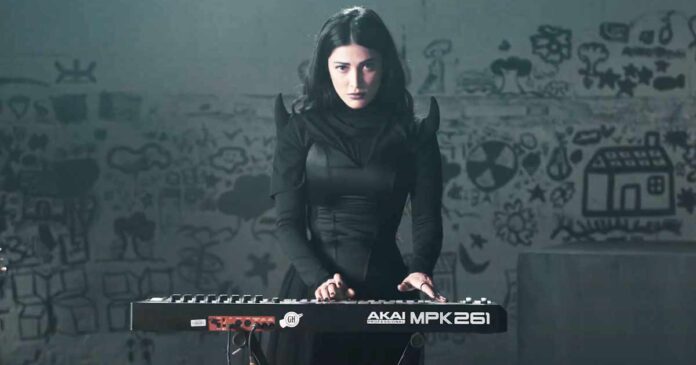 After the success of her first single ‘Edge’, actress-singer Shruti Haasan has now released her next track titled ‘She Is A Hero’.

Penned, composed, and sung by Shruti herself, the track, which also features popular rapper MC Altaf, was released on the actress’s official YouTube channel on Friday.

Commenting on the release of her second original track ‘She Is A Hero’, Shruti Haasan said: ” I’m so glad to finally put out my second single and that too with such talented musicians and with something that I care deeply about being a woman myself”.

“‘She Is A Hero’ brings together varied artists and a mix of genres to shine a light on the struggles and triumphs of women. A true musical collaboration, the track brings together MC Altaf’s unique flavour of music which complements Shruti’s singer-songwriter energy beautifully.

“The track has been produced by Karan Kanchan and Karan Parikh while visual artist Santanu Hazarika has donned the creative director’s hat for this special track. Screenwriter and lyricist Niranjan Iyengar has penned the additional Hindi lyrics for Shruti’s part,” said a source.

“The video of the song features girls from the NGO Shiksha Seva Foundation, which has made this track all the more special,” the source adds.

Must Read: Choreographer-Turned-Director Brinda Is The Real Thug, Says Khushbu