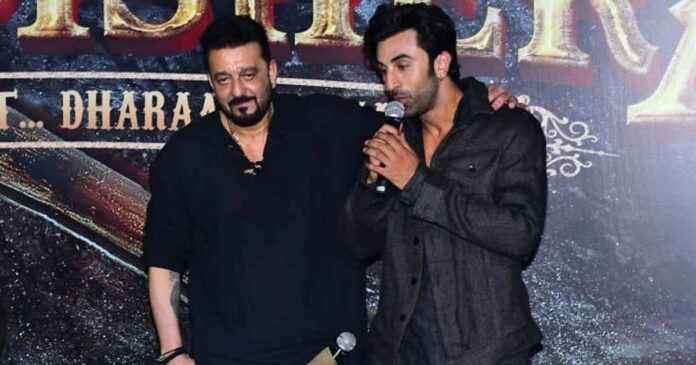 This afternoon, the much-anticipated trailer of Ranbir Kapoor’s upcoming film Shamshera was dropped online. It been quite some time, since the film was announced by Yash Raj Film, and fans are all excited as they now finally get to see a glimpse of their favourite actor in the upcoming film’s trailer.

The first rushes of Shamshera see Ranbir portraying the role of a dacoit-turned-freedom fighter, who will fight it out with Sanjay Dutt.

The trailer launch event of Shamshera took place this afternoon and a few snippets from the event have been doing rounds on social media. Ranbir Kapoor and Sanjay Dutt’s go back to the time when the former stepped into Baba’s shoes to star in his biopic. RK was last seen in Rajkumar Hirani’s Sanju that was based on the life of Sanjay Dutt. Speaking about their camaraderie at the Shamshera trailer launch, Ranbir Kapoor opened up about the time when Baba used to pull his leg.

While addressing media, Ranbir Kapoor revealed that Sanjay Dutt once asked him “body kahan hai” after seeing him working out consciously for 2 year in his gym. Ranbir was heard saying, “Jab mai Barfi aur Rockstar karraha tha I used to work out in his gym. So everyday he used to come down to the gym and say, ‘Yaar do saal se tu gym aaraha hai, teri body kaha hai?’And he used to keep saying, ‘Ab tu Barfi karrahai hai, teri next film kya hogi? Pedha ya Laddu?” Watch the video below:

At the same event, Ranbir Kapoor also opened up about reaching late at the trailer launch. The actor revealed his car got hit and the glass broke. RK further added, “My driver first took me to the Infinity mall, we were in the basement parking but there was no one. So we got late. As soon as we came out of the mall, my car got hit by someone and the glass broke. Karan says breaking of a glass is auspicious.”

Co-starring Sanjay Dutt, Vaani Kapoor, Saurabh Shukla and Ashutosh Rana in the lead roles, the film is helmed by Karan Malhotra. Backed by YRF, Shamshera will finally see the light of the say on July 22.