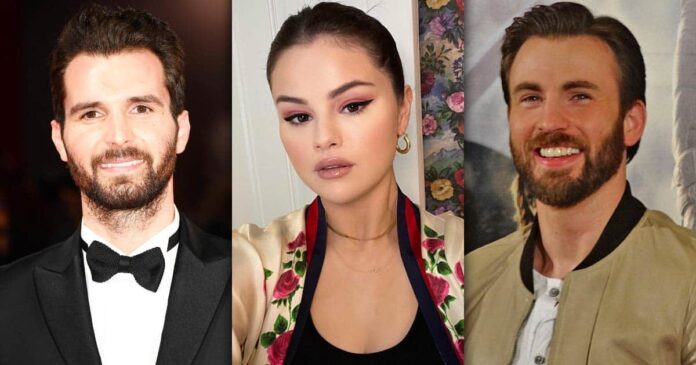 Selena Gomez is in her 30’s and living the best damn life she can. Be it her work or personal endeavors, she is slaying it all. The actress just recently appeared on season 2 of her show, Only Murders in the Building, alongside Martin Short and Steve Martin. Cara Delevingne has also made her debut as Alice in the latest season.

While talking about Gomez, she is keeping herself busy with acting and her company, Rare Beauty. But when it comes to leisure, Selena likes to take it to the ocean to have a relaxing time under the sun. Just recently, the actress was spotted on a yacht donning a s*xy black swimsuit.

While in Italy, Selena Gomez was photographed with movie producer Andrea Iervolino. The two were seen getting flirty with each other as they couldn’t keep their hands to themselves. Iervolino was holding Selena by her ankle as she dangled her feet in the water. She was in the same black-out swimsuit that we were talking about.

Though some people thought it was Chris Evans.

Chris Evans and Selena Gomez were spotted in Italy together pic.twitter.com/Qree3i5XD5

Meanwhile, Andrea Iervolino was in blue white shorts and a teal-green shirt. Both looked while having a lot of fun on the boat as both had huge smiles on their faces. It sparked speculations of a romance brewing between Selena Gomez and Andrea. However, this isn’t the first time that such rumours began.

Back in July, Sel was seen grabbing dinner with Nat Wolff. Both also sparked relationship rumours after they were seen together. Nat and Gomez have previously worked together in the 2014 movie Behaving Badly and 2016’s In Dubious Battle.

Selena Gomez has dated several Hollywood A-listers like Justin Bieber, The Weekend, Nick Jonar, Zedd, and more. It is not surprising that fans are invested in her dating life and would want to know whom she is dating next. What are your thoughts on her and Andrea Iervolino?

Must Read: Ezra Miller Accused Of Running A Cult, Grooming Minors & Trying To Have S*xual Relationship With Them?