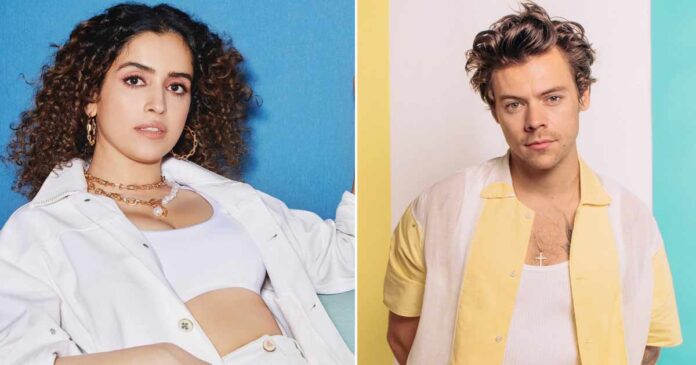 Sanya Malhotra is right not basking in the glorious success of her recently released film Hit: The First Case along with co-star Rajkummar Rao. The film – which was released on 15th July, has been receiving mixed reviews from the audience and fans, and most of them are positive responses.

The actress has been super busy with the promotional work for the film and has recently spilt some exciting beans about her Hollywood man crush. Well, we are sure you might be able to relate to this one for sure.

During a recent interaction with Bollywood Bubble, Sanya Malhotra along with her Hit: The First Case co-star Rajkummar Rao played a fun game of ‘Who’s Most Likely To’ in which the star revealed her undying love for singer Harry Styles.

During the game segment, Sanya Malhotra and Rajkummar Rao were asked who’s most likely to slide into someone’s DMs. Immediately responding to this, Sanya shyly smiled and said, ‘Me’. Adding to her answer her co-star said, “Harry Styles ko har hafte message bhejti hai ye (She sends messages to Harry Styles every week).” However, Sanya then corrected him and said, “Har hafte nahi, har mahine (Not every week, every month).”

When Sanya was asked whether she got any reply from her crush Harry Styles, she said, “Tumhe lagta hai kya. Agar reply aya hota… ye 2 saal se chal raha hai bdw. Agar reply aaya toh mein yaha thodi na hoti. (Do you think so? It’s going on since two years. If he had replied to me, I wouldn’t have been here)”

Haha! This is so relatable and we have to point out that Sanya indeed has remarkable taste!

What are your thoughts on Sanya Malhotra’s Hollywood crush being Harry Styles, does it match yours too? Let us know your thoughts in the comments below.

Must Read: Salman Khan Chooses Katrina Kaif Over Jacqueline Fernandez As A Better Dancer After Riteish Deshmukh Showered Praises On The Kick Actress