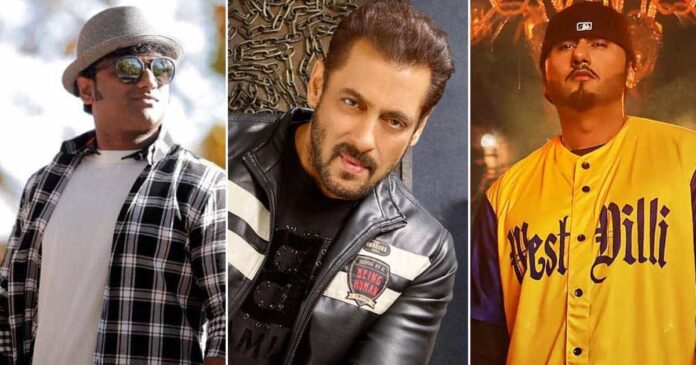 Salman Khan makes it to the headlines for various reasons and he’s creating a buzz for his upcoming film Bhaijaan (earlier titled Kabhi Eid Kabhi Diwali). The movie was on the news after there were speculations that something was off between actors and director Farhad Samji, but soon the matter was resolved. Now the latest report will excite Khan fans, as DSP aka Devi Sri Prasad who composed music for Pushpa has collaborated with Yo Yo Honey Singh for a groovy track for the upcoming film. Scroll below to read the whole scoop.

Other than Dabangg Khan, Samji’s film also stars, Venkatesh, Pooja Hegde, Raghav Juyal, Shehnaaz Gill, and Palak Tiwari. Earlier, Aayush Sharma and Zaheer Iqbal were also on board for the project; later the two were replaced by Jassie Gill and Siddharth Nigam.

As per the latest reports by Pinkvilla, Music Composer DSP aka Devi Sri Prasad has joined hands with Yo Yo Honey Singh for a peppy track for Salman Khan starrer Bhaijaan. The source claimed that the makers have already recorded the song and they are sure it’ll be a hit among Bhai fans.

A source close to Salman Khan starrer Bhaijaan told, “It’s a dance number marking the unique collaboration of DSP with Yo Yo Honey Singh. The makers have already recorded the song and some who have heard it insist that it would be an earworm for the audiences. It’s a merger of peppy beats with a bit of rap by Yo Yo Honey Singh.”

For the unversed, DSP is the man behind Allu Arjun starrer Pushpa’s catchy songs; he’s also making music for the sequel which will soon go on floors.

Earlier Bhaijaan team shot 2 songs in Hyderabad and one of them also features Ram Charan who’ll groove with Salman Khan and Venkatesh.