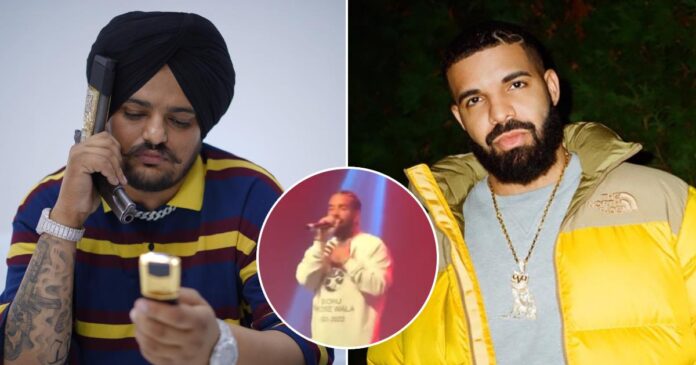 It’s been two months since Punjabi singer Sidhu Moose Wala was killed and shot dead, but his friends, family and fans continue to reel with the shock. On May 29, the Old Skool singer was murdered by a gang in Mansa district of Punjab, while he was on his way to his home. As soon as the news of his death flashed on our TV and mobile screens, who’s who of the entertainment industry expressed their grief. Not only national, even a few international personalities too paid tribute to the singer including rapper Drake.

For the unversed, reports were abuzz that Sidhu was all set to collaborate with international Drake, who was a big Punjabi singer’s fan.

Recently, rapper Drake left everyone in shock when he paid a heartfelt tribute to Sidhu Moose Wala in his own style. During his recent concert in Toronto, an International rapper was seen wearing a T-shirt that had the singer’s photo, name and years printed. For the show, Drake picked an off-white Sidhu name printed T-shirt and paired it with black lowers. The rapper was seen telling the crowd, “I’m here tonight, grateful, just as a kid who grew up wide-eyed. I’m a fan, I’m one of you tonight. I’m grateful to be from the greatest city in the world.”

Soon after the video went viral, netizens went emotional and wrote, “Respect for Drake,” “from one GOAT to another,” “This shows a relationship that Drake had with Sidhu Moose Wala,” among many other comments.

Earlier, producer Gurang Doshi had spilled the beans on Sidhu Moose Wala’s collaboration with international artistes. He had told ETimes, “This was a song for the web series called 7th Sense. It was our first collaboration. We have already shot 3 songs. One with Jason Derulo, one with Lil Pump and Honey Singh and one with Rick Ross, Swae Lee. Sidhu Moose Wala’s part was the only one pending. We were about to shoot in fact. The next day after I met Sidhu, we had plans to record at night and shoot the video the next day.”

“But Sidhu was not in the zone. He requested to do it the next time. I sensed that he was in great tension. He had an expo show as well, but even there he sang only 4 songs and left the show. He said that he came to Dubai because things were relaxed there. Things were also relaxed in Mumbai. Here, he would go to the malls and enjoy himself. Punjab at the moment is very volatile though,” added the producer.

After his killing, Drake had also shared Insta’s story in his honour to remember the singer. The rapper also followed Sidhu on social media.

Must Read: Janhvi Kapoor Is Afraid Alia Bhatt Will File A Restraining Order Against Her Soon & The Reason Is Something Unexpected