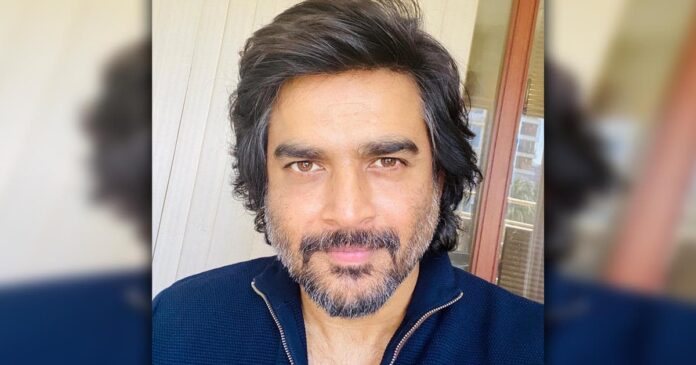 R Madhavan is currently gearing for the release of Rocketry: The Nambi Effect. The film is based on the life of Nambi Narayanan, a former scientist and aerospace engineer of the ISRO, who was accused of espionage. Madhavan has written, produced, and directed the film, and will also be seen playing the lead in it. Apart from him, the film will also see Shah Rukh Khan in a cameo appearance. For those who’ve come in late, SRK hasn’t charged a penny for his appearance in the show.

But now R Madhavan is making headlines for altogether different reasons. Recently, the actor grabbed netizens’ eyes when he trolled a troll. Read on

Re-tweeting the same, R Madhavan asked him why so much venom. In his now-deleted tweet, Madhavan said, “Easy bro.. you are a sportsman.. I am exhausted sleep deprived .so said less than 25lakhs instead of 250 lakhs .. but the point was it still less that 1.7% of the population – which was my point .. why so much venom bro.. not good for your sport .. .” 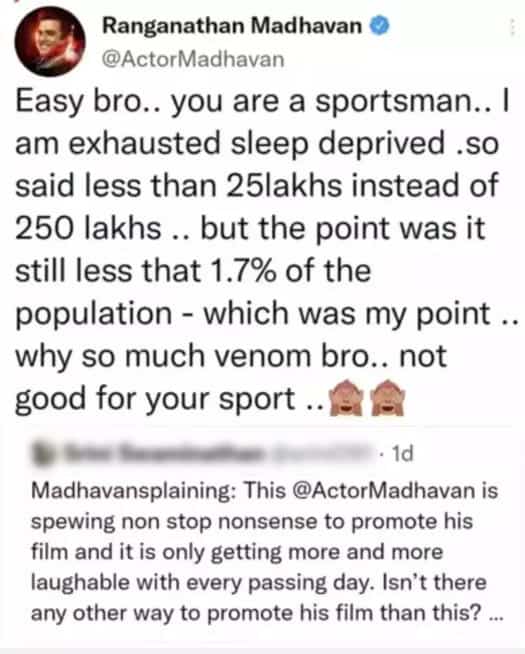 Recently, R Madhavan made headlines when he opened up about Shah Rukh Khan not charging a penny for Rocketry: The Nambi Effect. He recently said that he can’t call SRK and Aamir Khan his brothers.

Speaking to RJ Siddharth Kanan, R Madhavan was heard saying, “Let me tell you honestly, I don’t think of Shah Rukh Khan as my brother. That would be too presumptuous of me. He is a massive superstar. He had no reason to be a part of my film. And it’s not like we socialise or party together. He is a superstar, and I’m an admirer. He is also an outsider, but the amount of grace that he has, the amount of passion that he has shown me, the entire time that I have known him… From when we were shooting for Zero, and going before that and inviting me to his house, knowing that Sarita is a big fan of his. He has always shown us love, and I want to imbibe those qualities from him.”

Rocketry is all set to hit the screens tomorrow, i.e., July 1. Meanwhile, the film’s reviews are out and everyone is showering praises on the R Madhavan starrer.

Must Read: When Kareena Kapoor Khan Warned Saif Ali Khan Of Kissing Scenes & They Decided Not To Do It Because Of “Insecurity & Annoyance”