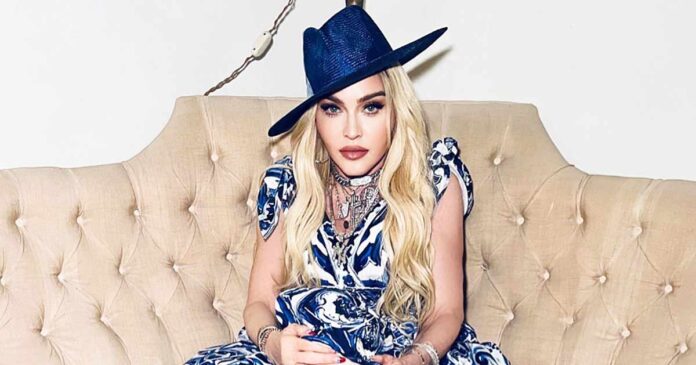 Madonna recently got candid while answering professional and personal questions about her life. The pop queen is known for not holding back when it comes to her words and herself. She has been a part of several controversies because of this reason but that hasn’t stopped being herself.

Previously, the Material Girl singer hit the headlines after she posted a video of herself French kissing two girlfriends passionately in the back of a car. It evoked the memory of her famous VMAs on-stage smooch with Britney Spears.

Now, Madonna is creating a buzz over her new video in which she answers 50 fan questions about her upcoming album, four-decade career, guilty pleasures, and biggest regrets. The Like a Virgin singer was asked what her “greatest guilty pleasure” and “current favourite obsession” is and to this, she responded, “s*x.”

Another question that Madonna was asked was what decision she “looks back on” and realises “wasn’t the best idea.” The pop queen said, ‘Get married. Both times!” It was a suggestion to her past marriages to Sean Penn, to whom she was married from 1985 to 1989, and Guy Ritchie, 53, from 2000 to 2008. Another thing that she answered was what she would be if she wasn’t a musician.

The singer said she would have been a teacher. For the video, the Queen of Pop wore a black, plunging dress, and fishnet stockings. Meanwhile, recently the singer made the headlines after hitting a record-breaking milestone. She became the first female to land an album in the Billboard 200 top 10 every decade since the early 1980s.

Madonna‘s new remix compilation, Finally Enough Love, debuts at No. 8 on the recent music chart. No wonder she is such a big icon. She has contributed a lot to the music industry and continues to.

Must Read: Thor: Love And Thunder’s Mixed Reception Makes Marvel Show Taika Waititi The Way Out Of The Franchise For Thor 5? Heartbreaking News For Fans!