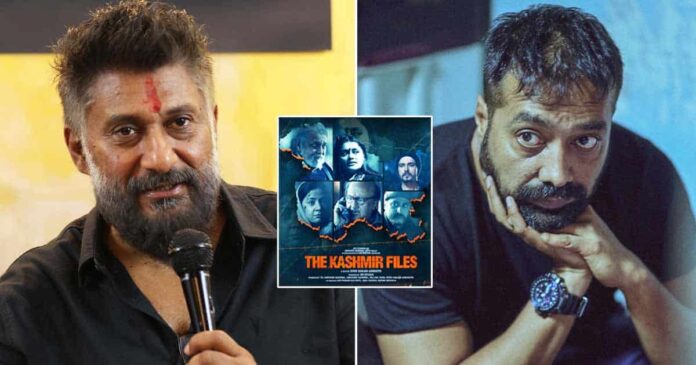 Two well-known filmmakers Vivek Agnihotri and Anurag Kashyap sit on the opposite ends of the political spectrum in Bollywood. Both are also known for speaking their minds often a bit too bluntly for most people’s liking. So evidently, when one makes a comment about the other’s film, controversies are bound to create.

Recently in an interview, Anurag made a casual remark that he wouldn’t want Vivek’s The Kashmir Files to be India’s official entry for the Oscars. The latter responded saying Anurag had tried to ‘sabotage’ his film. The war of words further intensified when Gangs of Wasseypur’s director said that he has not watched the film due to differences in ideology.

Anurag Kashyap had said, “What (films) we send for consideration and what kind of films are nominated, there is a huge difference there. Only a handful of our films have been nominated for Oscars because we sent the wrong films. I have not seen The Kashmir Files because it is not my ideology. But I stick to my words.”

For the unversed, The Kashmir Files is based on the exodus of Kashmiri Pandits from the Kashmir Valley in the 1990s.

Now Vivek Agnihotri has once again taken to Twitter and reacted to Anurag Kashyap’s comments. The filmmaker wrote, “Look at the intellectual dishonesty of these people, they judge and review your film without EVEN SEEING it. The genius filmmaker says TheKashmirFiles which is about Hindu Genocide is not his ideology. Does this mean his ideology is that of Islamic Terrorists Brotherhood?”

Look at the intellectual dishonesty of these people, they judge and review your film without EVEN SEEING it.

The genius filmmaker says #TheKashmirFiles which is about Hindu Genocide is not his ideology. Does this mean his ideology is that of Islamic Terrorists Brotherhood? pic.twitter.com/mfgjIB9WHz

The war of words between Anurag Kashyap and Vivek Agnihotri began after the former said that SS Rajamouli’s RRR should be chosen as India’s official entry for the best foreign feature film award.

So what do you think which of the movie The Kashmir Files or RRR should be chosen for the Oscars? Let us know in the comments.