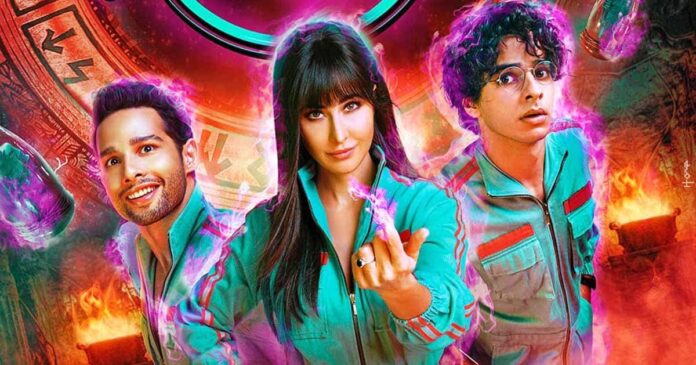 The film harps on comedy with a dash of horror and has been directed by Gurmmeet Singh, who is known for his work on the hugely popular web series ‘Mirzapur‘.

Sharing the official poster, Katrina Kaif captioned it as “#PhoneBhoot ki duniya mein aapka swagat hai. Arriving on 7th Oct, 2022 at cinemas near you. ” In the poster, one can see Katrina, Siddhant and Ishaan in matching outfits. The poster also features Jackie Shroff in a black outfit. A text on the poster read, “Ek Bhayaanak Comedy”.

Earlier, the makers had shared a quirky video, which set the tone for the logo release of the film. Phone Bhoot, which has been produced under the banner of Ritesh Sidhwani & Farhan Akhtar’s Excel Entertainment, has its script penned by Ravi Shankaran and Jasvinder Singh Bath.

Must Read: Shahid Kapoor Demands A Hike Of 5 Crores In His Salary Despite Jersey’s Box Office Failure?