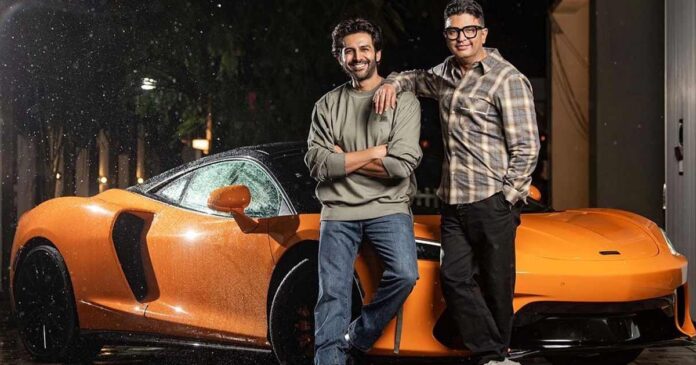 Bollywood actor Kartik Aaryan is currently basking in the glory of his recent successful film Bhool Bhulaiyaa 2. Anees Bazmee directorial created a storm at the box office and managed to earn Rs 184.32 crore lifetime in India. He also received a gift from producer Bhushan Kumar.

T-Series head honcho had gifted Kartik a swanky McLaren GT, which approximately costs around Rs 5 Crore (Rs 4.7 crore ex-showroom price). The actor has become the first Indian owner of the swanky car. He later shared a couple of photos where he is seen posing along with his new car.

Pyaar Ka Panchanama actor had to pay Rs 2 crore as tax on getting McLaren GT from Bhushan Kumar. In the below video, YouTube also explains the entire tax process as well. Take a look at the video:

Previously, the Chairman & Managing Director of T-Series spoke about his bond with Kartik Aaryan has grown manifold and this car is a token of appreciation. In a statement, he said, “The dynamic, vivacious energy of Kartik Aaryan is infectious. We align creatively well and the bond that started on a very professional note definitely has now grown multifold in multiple collaborations we have done. His dedication to each project is commendable. This sports car is a token of appreciation for his hard work and grit. We instill confidence in him, and we aim to strengthen this collaboration in the future.”

After Bhool Bhulaiyaa 2 success, Kartik Aaryan and Bhushan Kumar are now collaborating for yet another film Shehzada, which also stars Kriti Sanon in the lead role. The film is the remake of the 2020 Telugu film Ala Vaikunthapurramuloo.