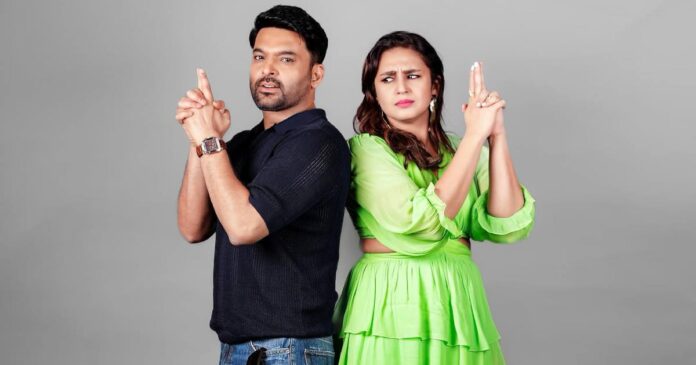 Kapil Sharma, who is all set to launch the new season of his popular reality TV series ‘The Kapil Sharma Show’, has shared a picture of him posing with Bollywood actress Huma Qureshi.

In the picture both can be seen standing back to back, with hands gestured as if they are ready to pull the trigger.

Kapil Sharma has asked his fans to make the guesses about his next project where they are coming together.

Kapil Sharma caption reads: “Any guesses which project me n @iamhumaq r doing together ? first ten winners will get a chance to come n watch #thekapilsharmashow live will like the correct answers #tkss”.

Few fans have commented that it is a spy movie or OTT show while some are calling it his next music video.

On the work front, Kapil Sharma will be seen next playing the role of food delivery boy in ‘Zwigato’ and his another project ‘The Kapil Sharma Show’ is going to start from September 10 with new contestants like Srikant Maski, Siddharth Sagar, Ishtiyak Khan, Srishty Rode and Satinder Soni.

Huma Qureshi, currently seen in the second season of ‘Maharani’, is all geared up for her next ‘Monica, O My Darling’.

What are your thoughts on Kapil collaborating with Huma Qureshi? Tell us in the space below.

Must Read: Anjali Arora Has No F*cks To Give To Trolls Amid Hatred Because Of MMS Leak Controversy: “This Is A Small Price You Pay…”