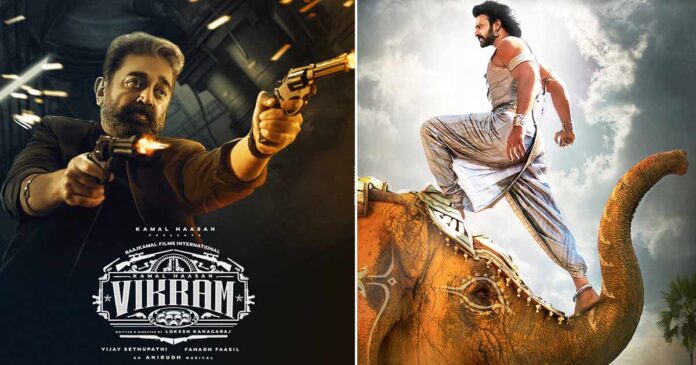 Lokesh Kanagaraj’s recently released Vikram starring Kamal Haasan, Vijay Sethupathi, Fahadh Faasil and Suriya went on to be a huge super hit at the box office. The film broke many records in no time and became fans’ favourite. To date, talking about its numbers, the action thriller is still doing wonders. The film gave a strong one to the other films that were released and clashed with it.

For the unversed, the action thriller was released on 3 June 2022 and is a part of director Kanagaraj’s ‘Lokesh Cinematic Universe’ (LCU). Now, according to fresh reports, the film is still doing well at the theatres and has once again hit a milestone. Read on to know more!

Recently it was noted that Kamal Haasan’s latest release is breaking all the barriers in the box office collection. Now the movie has become the highest-grossed movie in Tamil Nadu after beating the previous record-holding movie Baahubali 2, from 5 years back. It is noted that the Tamil Nadu shares of Vikram have crossed the Rs 100 crores and have proven to be highly successful for the procedures.

Kamal Haasan’s Vikram has now become the first Tamil movie that has crossed the 100 crore mark in Tamil Nadu. Reportedly the movie has almost neared the Rs 200 crores mark in the state. On the other hand, Vikram has made a total collection of around Rs 410 crores worldwide.

The movie stars Kamal alongside a superbly talented cast like Vijay Sethupathi, Fahadh Faasil, Narain, Chemban Vinod, and Kalidas Jayaram. The movie was directed by Lokesh Kanagaraj and showcased a group of black ops teams that have a mission to find and terminate a gang of Mass murders. The movie was made on a budget ranging from ₹120–150 crore.

Must Read: Vijay Deverakonda Goes N*de For Liger’s Poster Hiding His W*enie With Roses, Fans Say “If S*xy Had A Face, This Would Be It”

“Sanjay Leela Bhansali Used To Shout At Me, I Used To...