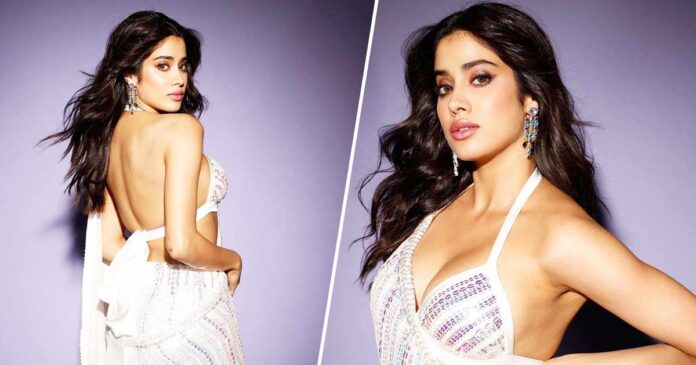 Last night, Bollywood’s renowned designers Kunal Rawal and Arpita Mehta’s pre-wedding bash took place and it was no less than a starry affair. The evening saw the who’s who of Bollywood arriving while putting their best fashion foot forward. B-Town celebs like Varun Dhawan-Natasha Dalal, Arjun Kapoor-Malaika Arora, Janhvi Kapoor and Shanaya Kapoor among others were seen in attendance.

A while back we brought you an inside video from the bash and it saw Malaika Arora and Arjun Kapoor grooving to Chaiyya Chaiyya.

For her appearance at the pre-wedding bash, Janhvi Kapoor looked too s*xy in a white sequined saree that we couldn’t take our eyes off her. The actress paired her pretty saree with a plunging neckline and backless blouse. Letting her hair down, she opted for soft glam make-up. But looks like, her look has not gone down well with netizens. Soon after her videos surfaced the netizens trolled her for a skin show at the wedding.

Check out Janhvi Kapoor’s look in the video below:

Meanwhile, Janhvi Kapoor has been slaying with her fashion looks every now and then. She often takes social media by storm every time she posts a photo on her Instagram. On the work front, Janhvi Kapoor has an interesting lineup of projects. She is currently gearing to begin shooting for Mr & Mrs Mahi. A few days back, a few photos of her practising cricket surfaced on the web. She was recently seen in GoodLuck Jerry for which she received rave reviews.

Must Read: Sidhu Moose Wala Unites India & Pakistan’s Army As Soldiers On The Border Groove To His Songs, Netizens Say “After All We’re Human Beings”