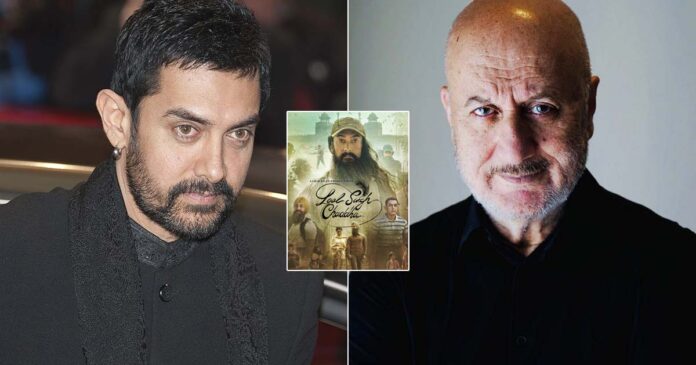 The buzz around Laal Singh Chaddha and the negative part of it has made the most number of headlines in the past few days. The movie that was one of the most awaited movies throughout the pandemic turned out to be a dud at the box office as it brought the lowest opening for an Aamir Khan movie in a long time. Several people have blamed the Boycott Bollywood trend for the loss. Talking about it now is Anupam Kher who feels otherwise.

Laal Singh Chaddha is the official remake of the Hollywood classic Forrest Gump. The movie stars Aamir Khan, Kareena Kapoor Khan, Naga Chaitanya, and others in pivotal parts. The film was appreciated by the critics but didn’t land well with the audience.

Anupam Kher who has come out of hit films The Kashmir Files and Karthikeya 2, now talks about the Boycott Bollywood trend and says it doesn’t affect the films. The actor also talks about Aamir Khan’s intolerance remarks he made in 2015 and how people have the right to be upset. He even talks about people blaming Prime Minister Narendra Modi. Read on to know everything you should.

He added, “Now, this boycott trend is happening but how does it matter? We were talking about Aamir recently, he made some statements earlier in 2015 after that Dangal came and became the biggest hit of all time in India. Did it affect his popularity or success? Everybody has freedom to express. If some people feel that they don’t want to watch a certain film then it’s their right. If a film is good and the audience likes it, there’s no way that it won’t do well.”

Anupam Kher was later asked about the claims that The Kashmir Files was endorsed by Narendra Modi. “Not every critic deserves a reply. If Modi ji’s endorsement had been enough then Narendra Modi biopic would have been the biggest movie. People who are saying all these things, I’m sure they can go to the biggest people. Not many people tweeted about The Kashmir Files, but a lot of people tweeted about the recently released films. This is so juvenile. When our films work then everything is okay, jab humari picture nahi chalti toh sab ispe daal do ye BJP ke log hai ye Modi ji ke log hai (When our films don’t work then put the blame on BJP or Modi ji’s supporters). You are a bad loser,” Kher said.

While concluding, Anupam Kher took the moment and took an indirect dig at Aamir Khan for his intolerance remark. “If people have not liked something you have done in your past then they have a right to sort of feel upset about it. It will come back to you,” he quoted.

What do you have to say about this? Let us know in the comments section below. Also, stay tuned to Koimoi for more!

Must Read: Vijay Deverakonda Hits Back Strongly At Online Trolls Trending ‘Boycott Liger’: “Should We Sit In Homes?”