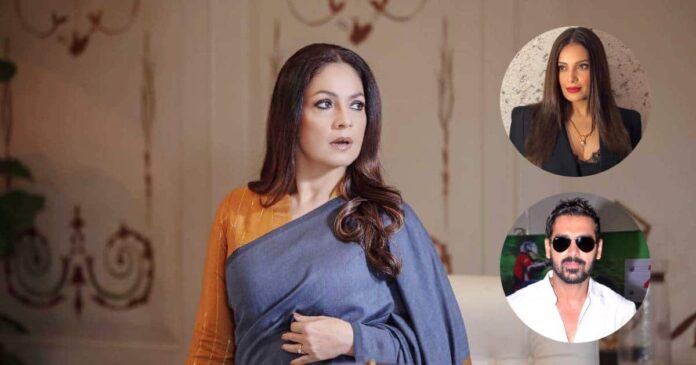 Coming back to the topic, Pooja Bhatt recently appeared on Kusha Kapila’s chat show, Tinder India’s Swipe Ride, she recalled when John Abraham complained about not being asked if he’s comfortable doing bold scenes. She said, “I did a film with Bipasha Basu and we launched the gorgeous John Abraham. I was actually directing the love scenes and stuff. I went to explain to them what was required.”

“I am telling Bipasha ‘this is what you need to do, and if you are not comfortable…’ and John Abraham just looked at me and said ‘Excuse me! Does somebody mind asking me whether I am comfortable doing this?’ It was like somebody threw a bucket of cold water on me. How presumptuous of us women to think that it is only the women who feel awkward in an intimate situation. The poor men,” Pooja Bhatt added.

Further, Pooja blesses all the men she has dated as the producer claims she learned something from each one of them. “I especially want to thank the people who broke my heart and stomped all over it because when you look back in hindsight and what you think is a box of darkness somebody has handed you, actually turns out to be the most massive gift you could receive. Because that is what reintroduces you to yourself,” she said.

On the other hand, Pooja Bhatt also opens up about her ‘type’ of men, she said, “I don’t think I have a type, but when I was in my 20s. No regrets, no regrets ever for a full life. But in my 20s, I had the capacity to walk into a room full of 100 men, for example. There would be 99 perfectly functional human beings and one rat hiding under a table. My zoning device would make me go straight to that and say ‘Hey baby, let me try and fix you’. But, you should not forget, you need fix yourself actually.”

Must Read: The Kashmir Files Steps Up The IMDb Ladder To Become Only 2nd Film From Bollywood After Aamir Khan’s 3 Idiots To Achieve This Record!