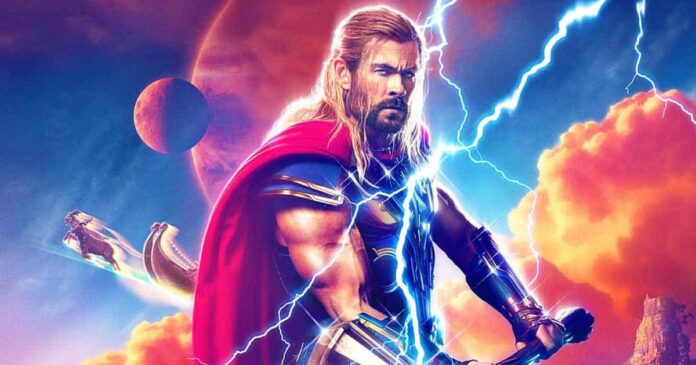 Hollywood star Chris Hemsworth bares it all in his latest release ‘Thor: Love and Thunder’ and said that showing off his derriere was a dream come true for him.

“It was 10 years in the making that scene, kind of a dream of mine,” Hemsworth told Variety during Thursday’s ‘Thor: Love and Thunder’ premiere in Hollywood.

“The first time I played Thor I took my shirt off and I thought, ‘You know what’s gonna sweeten this’ a decade from now it’s all gonna come off.”

Previously, it was revealed that shooting the scene was difficult because no one was ready to move their focus from Hemsworth’s b*tt.

The DOP of Thor: Love and Thunder said, “It’s incredibly hard to shoot Chris Hemsworth’s butt. I mean, nobody concentrates, nobody does their job, everybody’s looking at the butt, they’re not looking at what they’re supposed to be doing. That was a challenge.”

Although it’s still unclear what can be expected a decade from now, there’s a lot to take in from the fourth ‘Thor’ movie, directed by Taika Waititi.

When asked how the revealing moment came together, Waititi said it was important to him to highlight Hemsworth’s physique.

“I feel like we had all talked about it,” Thor: Love and Thunder director told Variety.

“We had talked about, ‘Yeah, we gotta show off this body’/ My whole thing was like, Chris works so hard, you’ve gotta show it off. Don’t cover it up with all these suits and the cape and stuff, it’s not fair!”

For Hemsworth’s part, it wasn’t the first time he had to bare it all on screen. But at the end of the day, he couldn’t be too shocked by what he saw.

“I had had that out in ‘Rush’ many years ago,” Hemsworth said.

The Thor: Love and Thunder actor also revealed that it was “intimidating” seeing Natalie Portman as the Mighty Thor for the first time: “A little stab to the ego, but I quickly got over it and I was in awe of everything she had done.”

Must Read: Johnny Depp Once Received Flak Over Comparing A Photoshoot To Being S*xually Abused: “It Feels Like You’re Being R*ped”