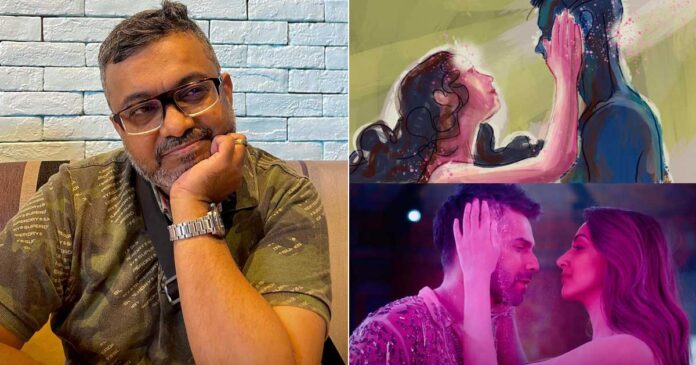 ‘Aafat-e-Ishq’ and ‘Aagey Se Right’ director Indrajit Nattoji whose ‘Rangi Saari’ song sung by Kanishk Seth and Kavita Seth had garnered accolades and millions of views has been relaunched as a new version in Varun Dhawan and Kiara Advani starrer ‘Jugjugg Jeeyo’.

Talking about the song, artist-director Indrajit shares: “Creating ‘Rangi Saari‘ was a solo artistic journey and a passion project designed and executed with no expectations of any accolades or revenue. It was art for art’s sake! The track ‘Rangi Saari’, by Kavita Seth and Kanishk Seth, is one that revived my love for contemporary electronic and Indian classical music.”

“Now that it features in a Dharma film, I am happy that the song reaches more people, but there is also a realisation that art in India needs validation from Bollywood to get noticed on a mass level. But there seems to be hope for independent music and art in India!”

The animated music video, conceived, visualised and created by artist and filmmaker Indrajit Nattoji, is his interpretation of the song by Kavita Seth. The music video is an impressionist series of handpainted, effervescent paintings showcasing the vibrant colours of first love.

Sharing about how the idea shaped up he says: “Kanishk Seth approached me to create a music video for his track, ‘Rangi Saari’. I immediately resonated with the song and agreed to create something with my art, and in return, I asked for complete artistic control and independence. It was a 6-month solo project where I kept painting between my then ongoing feature film shoot and production. I must have created some 4,000 or 5,000 paintings!”

Speaking about the new version of ‘Rangi Saari’ from ‘Jugjugg Jeeyo‘ he states: “The new video of ‘Rangi Saari’ this movie is a typical, filmy, and dutifully choreographed version with the film stars and ticks all the Bollywood boxes of a Dharma song. It is also lovely to see some of the frames of the new video inspired by my original paintings, like the one where Kiara Advani caresses Varun Dhawan’s face with Holi colour.”

Along with Kiara Advani, JugJugg Jeeyo also stars an ensemble cast including Varun Dhawan, Neetu Kapoor, Anil Kapoor, Maniesh Paul and Prajakta Kohli. The film, which is slated to hit the screens on June 24, this Friday, is bankrolled by Karan Johar’s Dharma production and Viacom 18.