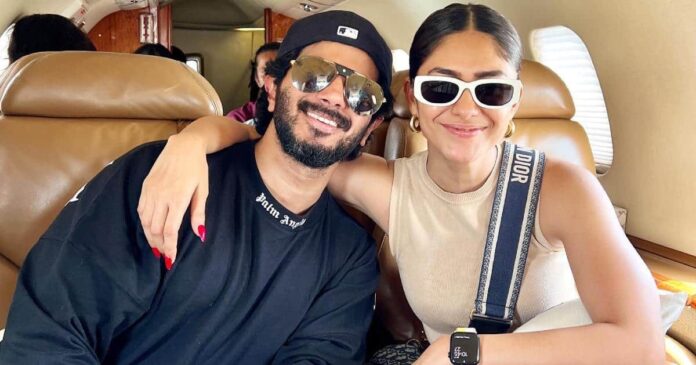 Actor Dulquer Salmaan and his co-star Mrunal Thakur are definitely very excited as their film ‘Sita Ramam’ has hit the theatres on Friday and their latest post on social media is proof.

Mrunal took to Instagram, where she shared a video featuring the two. In the clip, the actors are seen in an aircraft. Mrunal is seen looking at the camera and saying “Oh my god, I am so excited”.

Mrunal Thakur then pans the camera towards Dulquer, who in an overly excited manner copies Mrunal and says the same lines. The two then break out into a big laugh.

“SITA RAMAM IN THEATRES GUYS – OH MY GOD I’M SO EXCITED! #sitaramam,” she captioned the video.

‘Sita Ramam’ is a Telugu-language romantic film written and directed by Hanu Raghavapudi. It also stars Rashmika Mandanna and Sumanth.

Previously, Dulquer Salmaan has penned a touching birthday wish for his ‘Sita Ramam’ co-star Mrunal Thakur, who celebrates her birthday on Monday.

Taking to Instagram, the actor, who posted a video clip of him dancing with Mrunal, wrote, ” Priyamaina Sita Mahalakshmi Gariki (To dear Sita Mahalakshmi), When I first heard the script of ‘Sita Ramam’, neither did the film have a cast locked nor did it have a title.

“I knew Sita Mahalakshmi was one of the most special characters I’ve read and she had a face you imagined in a classic epic. You came on board the film and you gave her a face and life.

“In our first meeting, when you said, “Macha are you ready”, I knew we would have the best time making the film and be great friends. I watched through the toughest shoot days and challenging weather how you held onto your portrayal of Sita. What you’ve done as Sita is one for the ages and I think forever more to audiences you’ll be synonymous with the name Sita Mahalakshmi.”

The film tells the tale of an orphan soldier named Lieutenant Ram, whose life changes after he gets a letter from a girl named Sita.

Must Read: Pushpa 2: Vijay Sethupathi Gets His Wife In This ‘The Family Man’ Beauty?