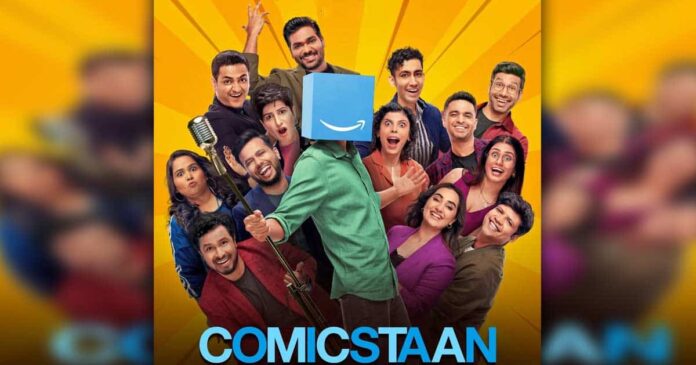 Amazon Prime Video dropped a rib-tickling trailer of Comicstaan Season 3 yesterday, promising loads of fun and laughter. The new season of the cult comedy series, which is set to stream globally from July 15, is bigger and grander with two hosts, seven mentors, four judges and a reimaged format. While the trailer seems like a lot of fun, we list down five things from the trailer that caught our attention.

The new and the constant

Comedian Abish Mathew, who has been hosting Comicstaan since its inception, will continue to host the new season as well. Joining the series as a host this season will be none other than internet sensation Kusha Kapila, who has made audiences laugh with her snackable content on Instagram. The trailer gave us a glimpse of the nok-jhok of the two hosts and it will be interesting to see the chemistry between the two hosts.

We also have mentors Anu Menon, Aadar Malik, Rohan Joshi and Rahul Subramanian who will be joining the show for the first time.

Fan favourite ‘Ronny Bhaiya’ aka Zakir Khan and ‘Pushpavalli’ Sumukhi Suresh have joined the judges’ panel in season 3 along with Kenny Sebastian and Neeti Palta. All of them have been mentors as well as judges in the previous seasons, but this time will exclusively sit on the judge’s seats. The four of them are well experienced and established in their own style and their feedback will surely help the morale of the contestants in the long run.

Get ready to get roasted!

For the first time in the history of Comicstaan, fans will see a roast episode, mentored by the master of roast comedy Rohan Joshi. The episode looks fun as we see glimpses of Rohan roasting the hosts and judges as well contestants taking potshots at Kusha and others. Along with the roast comedy, the season 3 will also see various genres of comedy such as topical, anecdotal, improv, observational, among others.

Comicstaan is a breeding ground for new and upcoming talents. Over the years, the show has given us some of the best comedians including Nishant Suri, Aishwarya Mohanraj, Prashashti Singh, Shreeja Chaturvedi, Aakash Gupta and Samay Raina among others. The new season presents to us eight new talented comedians who are set to step into the world of comedy and make us go ROFL.

There’s no doubt that Comicstaan Season 3 is going to be a laugh riot! The trailer looks promising and assures a heavy dose of laughter and fun. Now here’s a reason for your hurting tummy, teary eyes and aching jaws combined with some giggles.

Produced by Only Much Louder (OML) and hosted by Abish Mathew and Kusha Kapila, Comicstaan Season 3 will have Zakir Khan, Sumukhi Suresh, Neeti Palta and Kenny Sebastian as the judges. The contestants will be mentored by Rahul Subramanian, Sapan Verma, Rohan Joshi, Prashasti Singh, Kannan Gill, Aadar Malik and Anu Menon.

Must Read: When Shah Rukh Khan Was Publicly Insulted By A Lady On KBC Saying “Aapse Gale Milne Ka Koi Shauk Nahi Hai” Only To Get A Rocking Comeback By King Khan