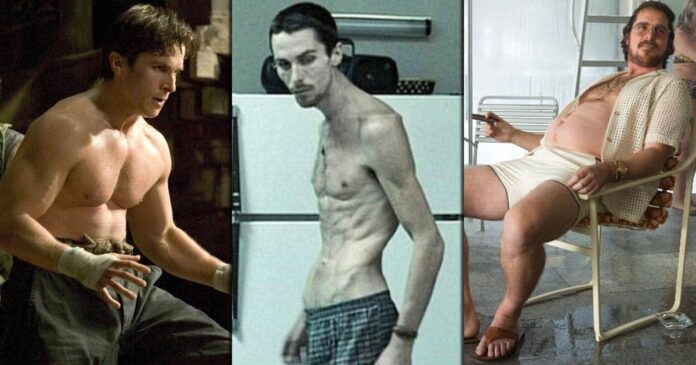 Christian Bale is a master of transformation. Be it gaining weight or shedding more than a couple of pounds or putting on muscles, shaving his head or more – the Batman actor has done it all. Over the years, the actor – who is all set to play Gorr the God Butcher in Marvel’s Thor: Love and Thunder, has impressed, astonished and shocked us with the different characters he’s played and how different they are from each other.

Today, we take a look at five of these transformations – they are way too many and check out the different things he ate (and didn’t eat) in order to get the desired weight for the character. Also, did you know he did a specific exercise to thicken his neck? Read on to know which movie it was.

Perhaps one of Christian Bale’s most famous transformations is that of him slipping into the skin of Trevor Reznik for The Machinist. In order to bring his weight down to around 120 pounds to play the insomniac industrial worker, the actor started with a diet that sounds too scary to follow. The actor had to limit his intake to up to 200 calories per day and told Star2.com, “I came up with the absolutely brilliant method of just smoking cigarettes and drinking whiskey to lose weight.” But when the results weren’t as fast as expected, he added black coffee, a solitary apple and a tin of tuna to his daily routine.

After shedding nearly 60 pounds for The Machinist in 4 months, Christian Bale had roughly 5 months to put on some muscles and get ready to play the caped crusader in Christopher Nolan’s Batman Begins. During an interaction with The Huffington Post in 2014, Bale opened up about gaining nearly 59 pounds– reportedly just six weeks, by gorging on pizza and ice cream. He said, “I overdid it because I was enjoying gorging. I was ignoring advice about taking it slowly because my stomach had shrunk, and I should just go with soups. I was straight into pizza and ice cream and eating five meals in a sitting. My stomach expanded really quickly. I got very sick during that time but I enjoyed getting sick. I didn’t mind it at all.”

He also stated, “In that short amount of time I did actually go from 121 lbs right back up to 180 lbs which is way too fast so that resulted in some doctor visits to get things sorted out.”

In 2010, Christian Bale dropped nearly 30 pounds to portray Dicky Eklund – a real-life boxer who struggled with drug addiction. While talking to Latino Review about becoming Eklund, Bale said he “was just running like crazy. I could just run for hours on end and I felt really healthy.” His dedication to transforming into Dicky won him several awards including an Academy Award for Best Supporting Actor, the Golden Globe Award for Best Supporting Actor, and the SAG award for Outstanding Performance by a Male Actor in a Supporting Role.

To play the ’70s con artist in the Abscam-inspired crime drama American Hustle, Christian Bale lost around 40-43 pounds (18-19.5kgs). How did he do that? Talking to People in December 2013 about it, he said, “I ate lots of doughnuts, a whole lot of cheeseburgers and whatever I could get my hands on. I literally ate anything that came my way.” He added, “I was about 185 and went up to 228. I’m still working it off.”

For Vice, the Batman actor underwent several shocking transformations including shaving his head, bleaching his eyebrows and gaining around 40 pounds. Revealing his secret to getting in the skin of former Vice President Dick Cheney, he told Yahoo he was just trying to provide “a blank canvas through which these incredible [hair and makeup] artists could create the various ages of Cheney. . . . They would shave my head every day, bleach and pluck eyebrows.” In a Vanity Fair article, Steve Carell stated that his co-star used to focus on “special exercises that would thicken his neck.” Wow

Some of Christian Bale’s other weight gain/loss transformations for his films include him going on one of his most restrictive diets to lose some weight for American Psycho. We also saw Bale beef up for Dark Knight, dropping the weight he gained for American Hustle for Exodus and losing the Vice weight for Ford v Ferrari.

We are really impressed by his hard work and dedication. PS: Please don’t try ANY of this at home.

Must Read: Woody Allen Opens Up On His Day-To-Day Routine: “I’m Home & There’s Nothing I Can Do But Exercise…”