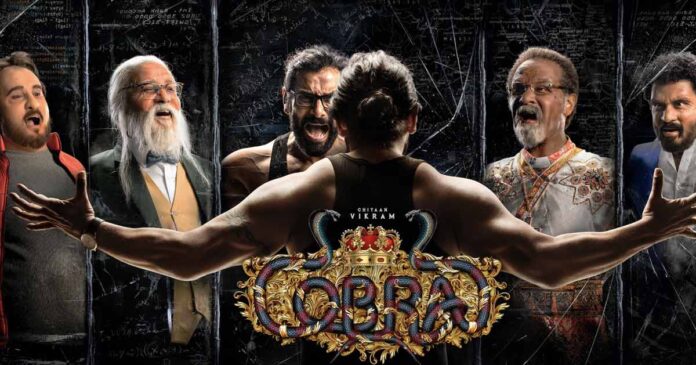 Cobra starring Chiyaan Vikram has been in the making for quite a long time. Finally, it is all set to hit theatres on 31st August. As Vikram is known for churning out some unique films and memorable performances, movie lovers have their eyes set on the upcoming Tamil thriller. Let’s find out how it is faring in the advance booking at the box office.

In the film, Vikram plays a role of a mathematician who goes on to solve a crime. The film was initially planned as a pan-India release with the makers announcing the arrival in five Indian languages- Tamil, Telugu, Hindi, Malayalam and Kannada. However, as per the latest development, the Tamil thriller is releasing only in Tamil, Telugu and Kannada.

The advance booking for Cobra opened yesterday across the country. Initially, a limited number of shows were available for ticket sale but now, the count is getting increased. As per the update till yesterday night, the Chiyaan Vikram starrer has witnessed a sale worth 1.80 crores gross approx. It is inclusive of Tamil and Telugu versions with the former contributing 1.65 crores.

Chiyaan Vikram is one of the stars of Kollywood, and the craze for Cobra justifies the same. In Chennai, over 140 shows out of 395 shows are almost full in advance booking for day 1. Other key centres of Kollywood too are showing good to very good responses. In the Telugu market, the start has been fair so far.

With a couple of days more to go, let’s see how Cobra picks up the pace!

Meanwhile, Cobra is helmed by R. Ajay Gnanamuthu. It also stars KGF fame, Srinidhi Shetty, as the female lead, while marks the acting debut of an ex-Indian cricketer, Irfan Pathan.

Must Read: Liger: Distributor To Suffer A Loss Of At Least 50 Crores, Vijay Deverakonda & Puri Jagannadh’s Jana Gana Mana In Trouble Due To Financial Crisis?