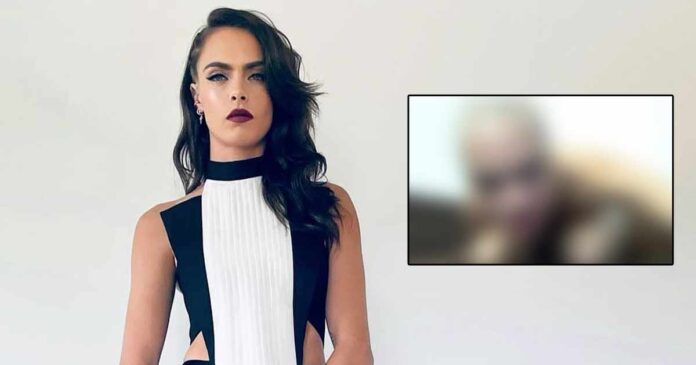 Cara Delevingne has always showed a little crazy side of hers, and even though we know her strange side, still this one video was a little too bizarre for us as well. A few years back, she took to her Instagram handle and shared a video that left us baffled, and here’s how the netizens had reacted to it. Scroll down to watch the video and check out the reactions.

Cara enjoys a massive fanbase who love her with all of their hearts. And even though her weirdness is known to all, her fans admire her nevertheless. She never shied away from embracing her weirdness.

However, in this throwback video that was posted back in 2018, Cara Delevingne can be seen sitting on the floor and crunching her knees towards her, but she was nak*d and bald. She could be heard as saying, “My precious”, it was quite obvious that she was acting. Well, that’s true as the actress was impersonifying The Lords Of The Rings’ character ‘Gollum’.

Sharing the video, Cara Delevingne had written in the caption, “#TBT I still don’t understand why I was single…#setlife #golum #beautiful.” Well, even though a large number of people had come in support of the actress, there were a few people who didn’t miss a chance to target her. One of them wrote, “Damn you, Cara! You almost scared me homos*xual !!! …hi, babe’.” Another one penned, “This is hilarious as hell, I can watch this over and over. You should make a longer version of this!! Funny AF shit lol.” Another user commented, “This video freaks me tf out.”

However, it seems Cara doesn’t care any of these hateful comments as she keeps her weird self close to herself. She can often be seen posting pictures with crazy expression, tongue sticking photos and so on and so forth. Once in an interview with People in 2017, she had said, “It’s not about being weird. We’re all weird. It’s about being who you are and not trying to be anyone else.”

Well, what are your thoughts about Cara Delevingne’s weirdness? Let us know in the comments!

Must Read: When Jennifer Aniston Recalled Rocking The Strip Tease Scene In ‘We’re The Millers’, “I Had No Taping, I Really Just Doubled My Bras”