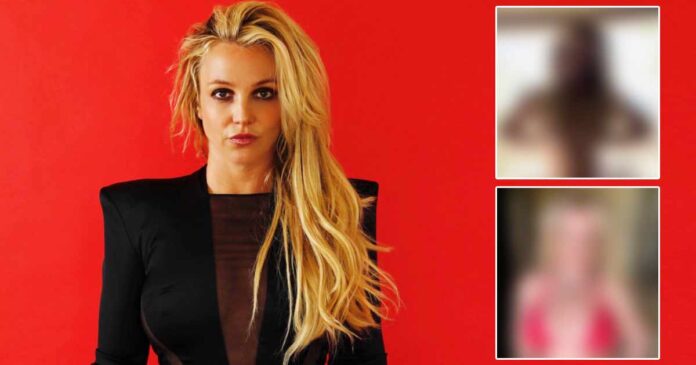 Britney Spears is in the news again. The pop star who makes the news for more personal reasons than professional has released her new song with Sir Elton John, a remix of his classic tune Tiny Dancer. The single – dubbed Hold Me Closer, mixes his 1971 hit with Elton’s The One (1992), as well as parts of Don’t Go Breaking My Heart (1976).

Well, keeping that aside, for now, let’s talk about the s*xy reason why Spears has made the headlines today. A couple of hours after announcing the release of her and John’s new song and it being No. 1 in 40 countries while enjoying a bath (while playfully putting on an English accent), the ‘Toxic’ singer shared two tweets – 1 a video and the other a way too hot picture.

First came the picture. In this pic, Britney Spears who has now quit Instagram can be seen stripped down to nothing but just a towel covering her lady parts. Yes. Perched on the ledge of a bathtub, the mother of two can be seen covering her b**bs with her hands while she laid a white towel over her waist.

The sunlight pouring in from the large window in the back paired her blond hair framing her face perfectly – before falling over her shoulders and lightly covering her b**bs, making her look stunning. Check it out here:

A couple of hours later, the popstar once more took to the micro-blogging site and shared a video of herself de-robing into a s*xy itty-bitty red bikini. Captioning this video “BEST DAY EVER 🌹 !!!” it features Jay-Z’s 2000 hit I Just Wanna Love U (Give It 2 Me) playing in the background. In the 14-second-long clip, Britney Spears can be seen walking down a corridor in a long white coat with black trim along the collar before stripping.

Moments later, she stylishly removes the coat revealing a pretty tiny two-piece string swimsuit. She styled the red bikini – that shows off her well-maintained midriff, with a beaded necklace set with a round, green stone pendant and multiple bracelets on her wrist. Walking down in heels, the pop stars looks straight at the camera with black liner-rimmed eyes.

What are your thoughts on these latest looks of Britney Spears? Let us know in the comments.

Must Read: Kim Kardashian Was Once N*ked Under Her Robe & Feared Thiefs Would Rape Her: “He Tied Me Up With Handcuffs & Zip Ties And Duct Tape”