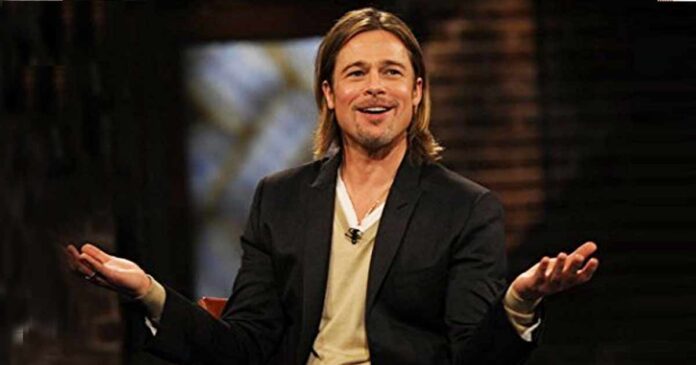 If there’s one actor who is aging like a bottle of old fine wine is Brad Pitt. And one thing that we can’t get enough of is his fashion sense. Be it his casual sightings, his movie characters or red carpet appearances, the Troy actor never misses an opportunity to make heads turn with his public appearances. The actor has now appeared on the cover page of a magazine looking handsome as ever and we are drooling over those looks. Scroll below to take a look at his pictures.

Brad doesn’t have his own social media accounts but has a lot of fan accounts dedicated to him. All thanks to his massive fan following across the world and also his fashion sense which works like a cherry on top for him. The Fury actor has now appeared on GQ’s August cover and giving us full mystical vibes with his photoshoot.

This is probably the first time that we have seen Brad Pitt in such crazy avatars for a photoshoot where he’s wearing glittery shirts and looking uber cool. In the first picture, Brad styled a white shirt by Budd London and paired it with Acne Studio pants and a Giorgio Armani glittery vest while donning a slick hairdo.

Brad Pitt accessorised this look with minimalistic statement jewellery. In the second picture, he wore a Tom Ford sparkly shirt with gems on his eyes. In the third picture, the actor has styled a Bode jacket with a Tom Ford shirt and Richard James pants.

Take a look at the the GQ’s cover picture here:

How can someone be so unbelievably handsome at this age!

Brad Pitt, you truly are a star!

Must Read: When Amber Heard’s Sheer Black Top Letting Her N*pples Free Proved That One Thing She Always Wins Is The Fashion Game!