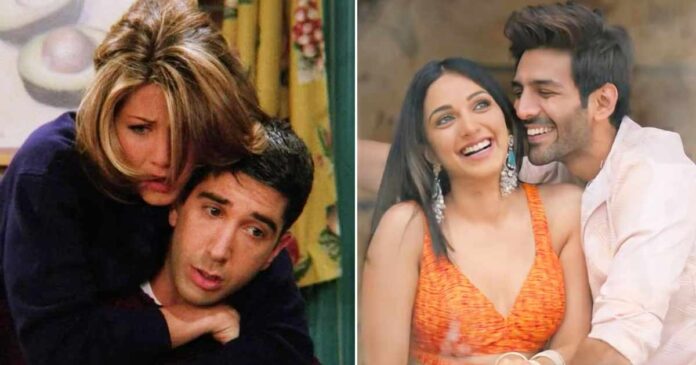 Bhool Bhulaiyaa 2 broke Bollywood’s bad phase as it received tremendous appreciation from the audience and critics, while it went on earn over Rs 200 Crore at the box office. Lead actor Kartik Aaryan too grabbed a lot of attention and now he’s getting amazing film offers from big directors and producers. It’s been over a few months since the movie was released and later, on Netflix, but now an eagle-eyed Friends fan claim BB2 makers copied a certain scene from the iconic show. Scroll below.

Coming back to the topic, Bhool Bhulaiyaa 2 received an amazing response upon its release and even the digital release on Netflix gained amazing numbers, as the film was among the top 10 trending lists for a long time. Meanwhile, a Reddit user recently shared a clip of Kartik Aaryan and Kiara Advani from BB2 and claimed it has been copied from a Friends episode, between Rachel Green and Ross Geller (played by David Schwimmer and Jennifer Aniston).

Check out the side-by-side comparison between the two scenes from Bhool Bhulaiyaa 2 and Friends shared by a Redditor:

TIL thi scene of BB2 was lifted from FRIENDS from BollyBlindsNGossip

Soon after the clip went viral, Redditors reacting to the same wrote, “Omg…… I knew it I had seen this somewhere….. OP … great find ..” another wrote, “Bollywood has been copying shit from everywhere since ages, so I don’t really expect much from those big commercial movies,” a third wrote, “UGHHHH. They are not even Sasta Rachel and Ross, they are worse than that!! Stop copying,” a fourth commented, “Friends scenes and situations have been reused like for ages in Bollywood.”

Meanwhile, a user also blamed Akshay Kumar starrer Good Newwz makers for lifting an entire scene from the iconic show. The user wrote, “Literally the amount of copying is in Bollywood is so blatant they take it from such popular shows – the biggest one I’ve seen is Good Newzzz they lifted the whole Monica lying to chandler because she was ovulating and trying to get pregnant and they had the exact same scene in good news I was shocked Raj Mehta had a few copied scenes in JUGG JUGG aswell ppl should call him out more.”

Not just Bhool Bhulaiyaa 2, Good Newwz and Jug Jugg Jeeyo, a user also talked about one of the Salman Khan movies for lifting a scene from Friends. They wrote, “In ‘Maine pyar kyun kiya’ they lifted an entire scene from friends. The one where Rachel’s is leaving and Phoebe says something’s wrong with the left phalange.”