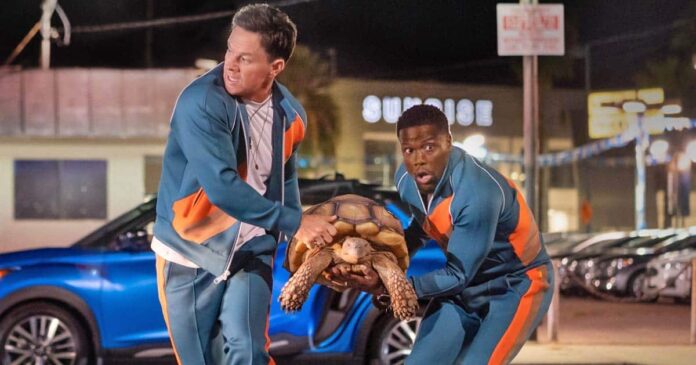 Hollywood actors Mark Wahlberg and Kevin Hart have come together for their recently released Netflix special “Me Time” which is said to be an action-comedy movie. Talking about the same recently Mark confessed in an interview that Kevin made him do the n*ked scene in the movie.

Mark is one of the most entertaining actors in Hollywood, giving movies like Pain & Gain, Shooter, Transformers: The Last Knight, and many more. The actor has now shared screen space with Kevin and we just can’t keep calm about it.

Recently when Mark Wahlberg arrived on the show Big Boy’s Neighborhood, he opened up about his experience working alongside Kevin Hart in Me Time and also revealed the reason behind the n*ked scene in the movie. Mark started by saying, “He [Hart] came to me with [the movie] and John Hamberg and I said, ‘Absolutely,’” adding, “But then, of course, they rewrote the part a little bit because, before my entrance, I had clothes on. Now I’m n*ked.”

Continuing on the same Mark Wahlberg also said, “They had me out there in Long Beach for 12 hours, a** out. I just got a pair of Travis Scott Jordans on. Got me a– n*ked, then he put me in Daisy Dukes.” The actor also said, “I mean, he(Kevin Hart) did me dirty,” adding, “But the scenes are so funny, so I’m like, you know what? I got to do the same thing. I got to be fearless as an actor and just go for it and try it.”

In the same interview, Mark also talked about how his family reacted to the n*ked scene when he brought his wife and daughter to watch it without any early warnings. He said “The first time I first come out a— naked, my daughter — her face was purple but laughing hysterically. I mean, she was a little embarrassed but she couldn’t stop, man.”

Meanwhile, before Me Time, Mark Wahlberg was featured alongside Tom Holland in Uncharted. The movie based on a video game of the same title was directed by Ruben Fleischer and came out on 18th February 2022. The movie also starred Sophia Ali, Tati Gabrielle, and Antonio Banderas along with the lead actors.

So what are your thoughts on Kevin Hart and Mark Wahlberg’s dynamic? Do let us know in the comments

Must Read: Amber Heard Called Kristen Stewart, Margot Robbie & Cara Delevingne To Help Her With A Place To Stay But They All Ghosted Her, Is Hollywood Boycotting The Aquaman Star?