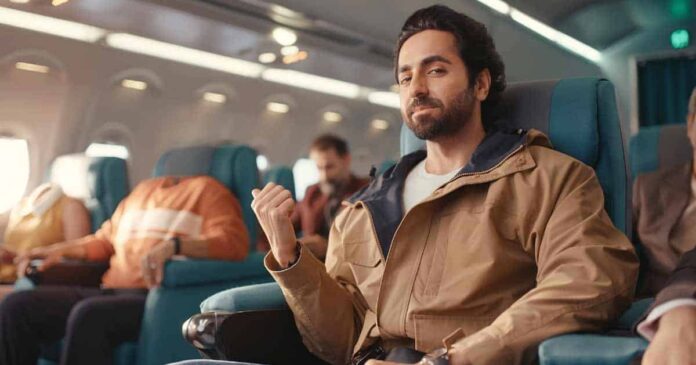 Bollywood star Ayushmann Khurrana has been creating a buzz of late about his upcoming movie ‘Doctor G’, which will mark the directorial debut of Anurag Kashyap’s sister, Anubhuti.

A few days back the actor shared photos on his social media where he could be seen seated inside an airplane.

What caught viewers’ attention was the appearance of headless people around Ayushmann Khurrana on the flight. The mystery has finally been solved. The photos were not from a real airplane but a set that was specially constructed for promotional purposes.

‘Doctor G’, which also has Rakul Preet Singh in a lead role, is slated for an October 14 release. The trailer of the film released a while ago and has been receiving raving reactions from fans.

Meanwhile, the over two-minute trailer shows Ayushmann asking to change his course from Gynaecology to orthopaedic. Later in the clip, actress Shefali Shah, who too plays a gynaecologist is seen asking Ayushmann, who starts attending classes, to lose the “male touch” to understand women. The trailer ends in a hilarious sex education to a couple who are trying for a baby.

Are y’all excited to see Ayushmann Khurrana in a never before seen avatar in Doctor G? Tell us in the comments below.

Must Read: Priyadarshan The ‘OG’ Hera Pheri Maker Is Back, Confirms Hulchul 2 & A Film With Akshay Kumar, Says “There’s A Plan”