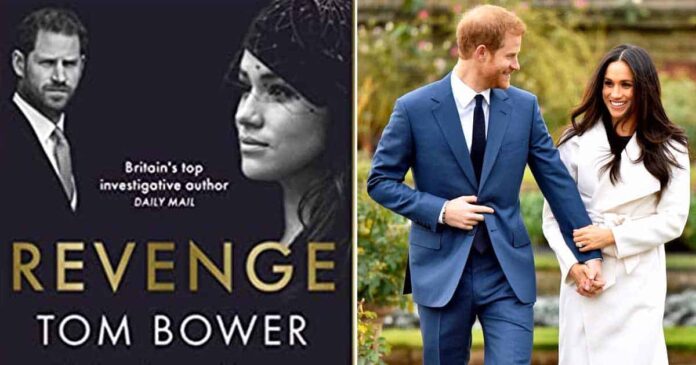 Meghan Markle, Duchess of Sussex, has garnered the media spotlight for various reasons since her marriage to Prince Harry, younger son of Charles, Prince of Wales, and the late Diana, Princess of Wales. She is grabbing eyeballs for her differences with the other members of the British Royal Family, her fashion choices and so on.

Tom Bower’s recent audiobook �Revenge: Meghan, Harry and the war between the Windsors’, reveals some interesting and startling facts from the life of Meghan. Here are a few anecdotes from the audiobook:

“Meghan did not feel the same towards Kate. Within a short time, she complained that Kate had not adequately welcomed her.”

As both Meghan and Kate come from different family backgrounds and have a different outlook or values, they don’t come across having very good terms with each other. So, there were certain differences like about following the dress code as per the royal traditions.

According to Bower: “The tension troubled Kate when she arrived with Charlotte, her three-year-old daughter, at a fitting for the bridesmaids’ dresses.”

As per the audiobook, there was disagreement between the two regarding whether the bridesmaids should wear tights or not for the wedding. “Following the protocol, Kate believed they should. The Californian was uninterested in royal tradition. By then, Kate was also irritated by complaints of Meghan bullying her staff. That disagreement was followed by an argument about the length of Charlotte’s hem. Kate thought it was too short, and anyway did not fit,” adds Tom.

This escalated when Melissa Toubati, Meghan’s assistant, and the dress-fitters employed by Givenchy’s Clare Waight Keller, witnessed Meghan emphatically reject Kate’s observation. “The stand-offs, Kate decided, confirmed the complaints by Toubati and other members of staff about Meghan, Kate burst into tears.”

This doesn’t end here. “After leaving that unhappy scene, Kate decided to make amends. She crossed the Kensington Palace corridor and presented Meghan with a bunch of flowers. Kate also told Meghan not to speak rudely to her staff. �That’s unacceptable.’ What followed can never be irrefutably established. In Kate’s version, Meghan slammed the door in her face and threw the flowers in a dustbin. Meghan would tell Oprah Winfrey that the tears were shed by her, not Kate, and the flowers were an apology. �I think that’s where everything changed,’ Meghan rightly said.”

Kirstie Allsopp, a friend of Camilla, would later confirm that Kate was reduced to tears by Meghan bullying her staff.

“To please Harry, the Queen agreed to ditch centuries of tradition. Meghan would be fast-tracked into the Royal Family before the wedding.”

In the book, Bower describes the first meeting between the Queen and Meghan in great detail.

He says: “Two weeks after the Invictus Games ended on 12th October, Harry introduced Meghan to the Queen in Buckingham Palace. Over tea and sandwiches, the monarch formally approved her grandson’s engagement.”

He further shares: “The 91-year-old had no choice. Apparently, she had already met Meghan in Windsor Park. In a fleeting, unexpected encounter, Meghan would claim to have performed an unrehearsed botched curtsey. During the formal meeting in the Palace, Harry would describe how the Queen’s corgis, who had for the previous 33 years barked at him, lay at Meghan’s feet and wagged their tails. Meghan described the scene as �very sweet’.”

“Harry’s request for his own office or court to build the Sussex brand of philanthropy and humanitarianism, separate from Buckingham Palace but financed by the Queen and the taxpayer, was rejected.”

Furthermore, Bower mentions various instances where Harry tried to fulfil Meghan’s demands that were at certain times against the norms of the royal family’s protocols.

He mentions: “A few months after the wedding, Harry asked the Queen’s permission to leave Nottingham Cottage and establish their lives beyond Buckingham Palace’s control. To accommodate her grandson, the Queen agreed that the couple should be allocated the Frogmore cottages on the Windsor estate. Although it was hard to believe that Meghan wanted to live 25 miles from London and under the Heathrow flight path, builders were contracted to rapidly convert the five dilapidated units into a luxury five-bedroom house.”

The audiobook mentions how the line was drawn, but Harry’s demands were still met. “On the Queen’s orders, he was told that he would be allocated a small office inside Buckingham Palace – and under the Queen’s supervision. While William had his own organisation, Harry was sidelined. The decision was supported by Charles.”

Must Read: Johnny Depp Attempted To Submit Amber Heard’s N*de Photos Implying She Was An E*cort At One Time, She Suggests He Took Er*ctile Dysfunction Medication? [Reports]