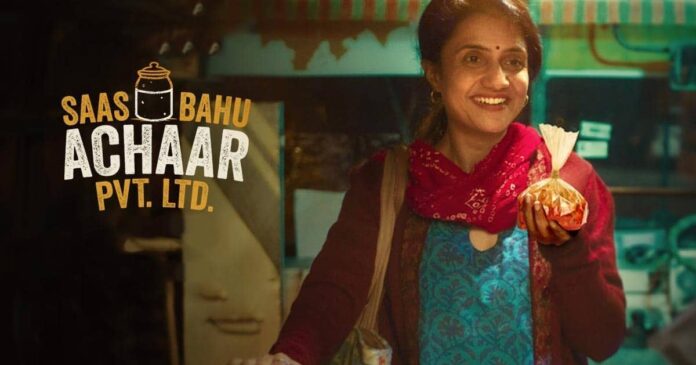 Runtime: 6 Episodes Around 40 Minutes Each

A woman is in turmoil in a family in heartland India. Her husband has fallen out of love and has found a new partner. The two have decided to get a divorce but the conflict is about the kids. The age-old question of will a single woman with no education be able to bring up two kids alone is asked and she sets out to find the answer.

TVF over the years has made their USP, humour which is shaping up stories close to home. Every single property under the banner is either your story or your neighbour’s, it’s that relatable. With Saas Bahu Achaar Pvt. Ltd. The studio decides to tackle to complex dynamic of divorce and people falling out of love in a deep-rooted Indian family, even ideologically. It is a story about an angle in a divorce that films and daily soaps have never ventured into and that is the biggest victory of this show.

Story by Arunabh Kumar and Akansh Gaur, dialogues and screenplay by Swarndeep Biswas, Abhishek Srivastava & Manan Madaan, Saas Bahu Achaar Pvt. Ltd Cannot be boxed in a certain story type. It is a story about liberation, it is a story about choice, it is a story about courage, and most importantly a story about the moment one must pull the trigger. The writing shapes this world as any other household. A father who goes on a mundane job, a mother who is a homemaker and not much literate, two kids with teenage problems, and a grandmother who is loving. The conflict here is that the father has fallen out of love and is now into another woman who he is married too. So the mother now has to stay separately and build a world for herself.

One must give the credit to the makers for building a world that doesn’t glorify one at cost of making others the villain. While there is a stepmother in the house, there is not even a bit of evil in her. She is caring, and loving and understands the fact that she has snatched someone else’s place, but for love. The moral ground is high around her, but her idea of her life is even higher. Such a lovely thing to watch.

The show gives a nod to those innumerable women who were shamed for being illiterate, but that wasn’t their choice. At many junctures some or the other character reminds how Amruta character is not ‘itni padi likhi’, but the woman has seen life and has learnt to tackle it. There is a transformation and a world outside marriage that she discovers. So fulfilling that journey is. Of course it takes her time to accept the turmoil that she is pushed into by her husband, but she fights hard and rises above it.

It is Amruta Subhash and there can be no wrong move here. The actor is phenomenal for the lack of a higher adjective. The actor jumps in and makes Suman her own. There is a sense of dejectedness around her because of everything that has happened and she makes you see it effortlessly. Also, a few actors can cry so convincingly as this lady does. Sheer talent!

Yamini Das as the Saas is every cute Dadi/Nani we meet. She adds much more to the character than just being another aged character in a script. She is adorable and so is her craft. Anjana Sukhani gets to play a well written part. Even the makers understand that a viewer might assume her to be evil and they take their own time to break your myth. Anjana does a great job with them.

Anup Soni is that husband who has almost no one’s empathy. While he is also who is feared, the world also uses him as a punching bag. While the entire runtime gives him little to shine, in the climax he asks, “kya me tumse pyaar nhi karpaya ye meri galti hain”, and no one has an answer. Separation is a subjective discussion not a one tone storyline. The makers address just that.

The rush in saying it all. There is so visible effort to keep it all crisp that the topic that needed more marination just speed up without creating any impact. While the husband is in a dilemma to chose love or society, the wife is dejected and broken by his decision. Why does she never burst out and vent her anger on his face? Imagine Subhash doing that.

The impact of parents having a tough war is bigger on kids. The is a nod to it but it deserved a much more attention and runtime. A very potential subplot is wasted.

With some flaws, the heart of this show is in the right place and that is quite an important thing. Give it a chance on a day you want to watch a light hearted family drama. You won’t regret.

Yet to watch Netflix’s latest crime drama? Read our She Season 2 Review here.

Must Read: Suzhal: The Vortex Review: Every Frame An Allegory, Every Actor In Their Best Form, Pushkar & Gayatri Gave Tamil Industry A Visually Scintillating Jewel