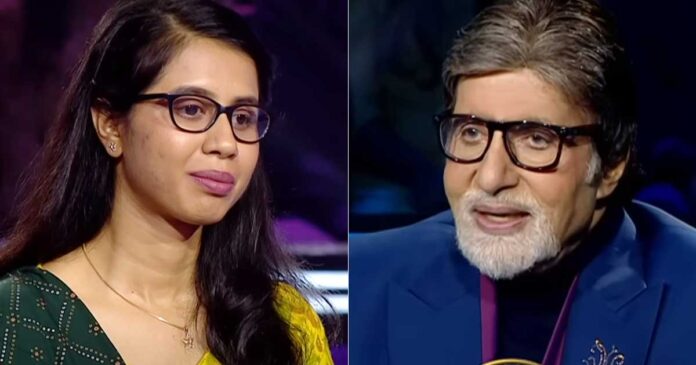 Megastar Amitabh Bachchan was in awe of visually impaired ‘Kaun Banega Crorepati 14’ contestant Aneri Arya from Surat, and kept praising her for her logical reasoning skills and the calmness with which she approached the quiz-based reality show.

Despite the challenges that come with her disability, Aneri finally managed to win Rs 25 lakh on the show. She chose the right option given to her for the question: In the year 1967, citizens of which place voted against joining Maharashtra through a referendum? The options given to her were (A) Belagavi (B) Kutch (C) Goa and (D) Junagadh and she opted for Goa, which was the right answer.

Though it was a critical moment for her, Big B left his seat to offer her a glass of water. But she got the answer right and took home Rs 25 lakh.

Talking about the winning amount on the show, Aneri said: “When Amitabh sir announced that I have won Rs 25 lakh, it took me a while to absorb the fact. When I could finally comprehend that I had answered the question correctly, all my life’s struggles crossed like a train of thoughts through my head, and I felt overwhelmed.”

A resident of Surat, the 26-year-old ‘KBC 14’ contestant is an assistant professor of English at Shree Bhaikaka Sochitra Government Arts and Science College.

She also thanked her parents for helping her learn to read and write, which is why she does not use Braille but takes the help of AI software. Both Big B and Aneri also praised Gujarati cuisine.

“I knew my parents, who were sitting behind me, were very proud of me and I could feel their loving gaze on me,” she said, recalling her experience.

“It was an amazing experience; something I don’t think I can ever forget in my lifetime. My dreams of studying further have been unlocked with this prize amount and I hope I have made my family and friends proud. It’s certainly one of the high points in my life so far.”