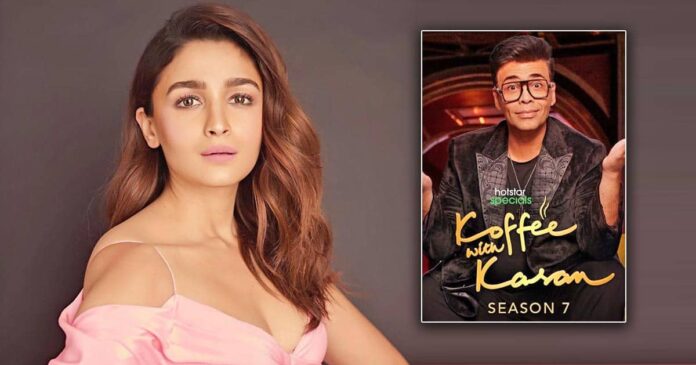 The seventh season of popular chat show ‘Koffee With Karan’ is set to premiere on July 7 and will see Bollywood stars Ranveer Singh and Alia Bhatt gracing the couch for the first episode.

During the episode, show host Karan Johar and ‘Gully Boy’ co-stars Ranveer and Alia touched upon celebrity relationship trajectories, supporting their partners and their lives after marrying the love of their lives.

Alia Bhatt took the conversation further with her experience of fitting into the Kapoor clan on Koffee With Karan 7.

Tracing her journey of shifting from a nuclear family and adapting to the majestic celebrations of Bollywood’s First Family, she said, “I have been brought up between me, my mum, my sister and my father. That was it. Our interaction was very limited. We were a very close family, but we were not a big family. We did not have these massive celebrations or get-togethers.”

Chalking out the difference between her home and that of her in-laws, Alia mentioned, “Everybody did their own thing. Enter the Kapoor family, where everyone does everything together. You eat together, do aarti together, everything is done together. It was cute. I have been through so many moments of culture and family because of the Kapoor family that it has given me a totally new layer in my life.”

Season 7 of ‘Koffee with Karan’ will air on OTT platform Disney+ Hotstar, with new tattletale games including Koffee Bingo, Mashed Up, along with the all-time favourite rapid fire — bringing fans closer to their favourite stars. The first episode will drop on the streamer on July 7 at 7 p.m. (IST) with every new episode coming up every Thursday.