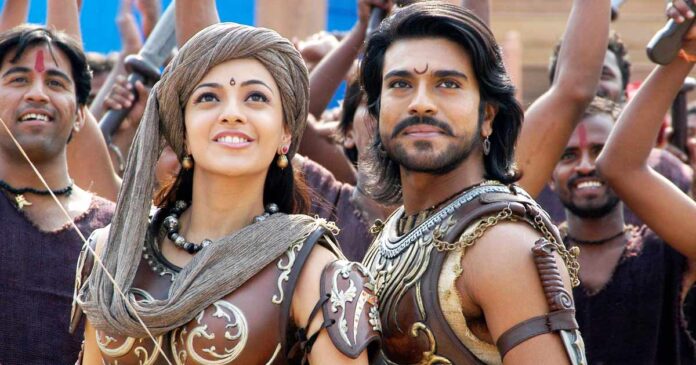 Mega Power Star Ram Charan has cemented his position as a global star. His acting prowess in RRR has been receiving accolades from across the corners of the globe. However, from the last 4 days, fans have been rejoicing by celebrating 13 years of yet another blockbuster Ram Charan film- Magadheera, which released on July 31, 2009.

Check out these fun facts about this movie that is now available for viewing on AHA studios or MX Player:

Magadheera is a 2009 Indian Telugu-language fantasy action film directed by S. S. Rajamouli who co-wrote the film along with V. Vijayendra Prasad.

The reincarnation-themed plot revolves around four people: a valiant warrior in charge of a princess’ safety, the princess who is in love with him, the commander-in-chief of the army who lusts after the princess, and an emperor who wants to conquer their kingdom.

Made on a budget of ₹35–44 crore (US$7–10 million), it was the most expensive Telugu film at the time. It was the first Telugu film to list a “Visual Effects Producer” in its credits.

Magadheera was released on 31 July 2009 to a massive commercial success ans critical acclaim. It collected a distributors’ share of ₹73.6 crore and became the highest-grossing Telugu film in history at the time.

The film’s success catapulted the lead actors into stardom. In 2014, it was remade in Bengali as Yoddha: The Warrior.

It was the first film in which Mega Power Star Ram Charan starred with Kajal Aggarwal together.

So what are you waiting for ? Follow the RC Fan tweets and binge watch the same on OTT via MX player on its 13th Anniversary, 31st July!

Must Read: It’s Prabhas VS Ram Charan VS Mahesh Babu VS Jr NTR At The Box Office Next Year? Get Ready For A Historic Clash If It’s True